When footballers try their hand at music… 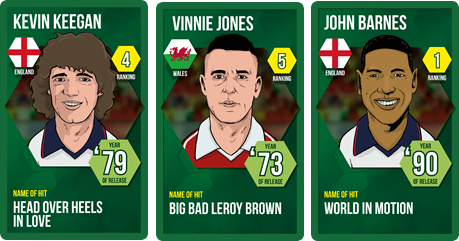 On the eve of Euro 2016 someone at music streaming service Deezer has a good look at their streaming data to find out if any footballers have managed to do well in the music industry – and found enough of them to pick a full team, with one still a current player.

Sadly it’s not the best selection of songs, on the whole, with former Liverpool, Hamburg and Newcastle forward Kevin Keegan giving everyone the opportunity to tell him they’d “love it” if he stayed well away from any recording studios. His effort, ‘Head Over Heels in Love’ is at No.4 in Deezer’s chart. Somehow.

Top of the chart is another ex-Red and this time it’s probably the best of the lot by some distance. No, not his efforts on Craig Johnston’s ‘Anfield Rap’ with the rest of the LFC squad from 1988 but his well-loved rap along with New Order on ‘World in Motion’, England’s World Cup song for Italia ’90. The difference ‘Digger’ made was enough for it to be New Order’s only UK No.1 and it’s now Deezer’s most streamed song by a footballer.

Although John has now retired from playing he is still rapping and can often be heard doing so on tour with 5Times, the Liverpool Former Players Association, although more often than not it tends to be ‘Rapper’s Delight’ by the Sugar Hill Gang and it’s well worth a listen if you ever get chance to go to one of his shows.

Real Madrid’s Jesé Rodríguez is the current player who’s had a dabble in the music industry and the Deezer list also includes actor Vinnie Jones, who used to dabble in the football industry.

Explaining their chart, Deezer say: “By examining the long-standing relationship between football and music – from renowned chants to rousing championship raps – the line-up is composed of European players past and present who have tackled the music industry, and have been ranked according to the frequency of their music streams on the platform over the last 12 months.”

Of Barnes and New Order’s efforts Deezer say: “It comes as no surprise that England midfielder John Barnes takes the coveted title of the most streamed footballer in the ‘Deezer 11’ with his 90s smash hit and team up with New Order, World In Motion – perhaps the only thing England will win this year.

“Receiving almost five times as many streams as his closest rival Jesé Rodríguez, World in Motion is almost as synonymous with John Barnes as his powerful left foot.”

The Rodríguez number is Spanish hit, ‘Yo Sabía’, which pips the effort by the sadly recently departed Dutch soccer maestro Johan Cruyff. His hit was ‘Oei, Oei, Oei (Dat Was Me Weer Een Loei)’, one we’re sure everyone reading this is familiar with.

The ‘Starting 11’, ranked in order of streams, is:

**Note: Peter Schmeichel’s and Youri Djorkaeff’s hits are not listed on Deezer 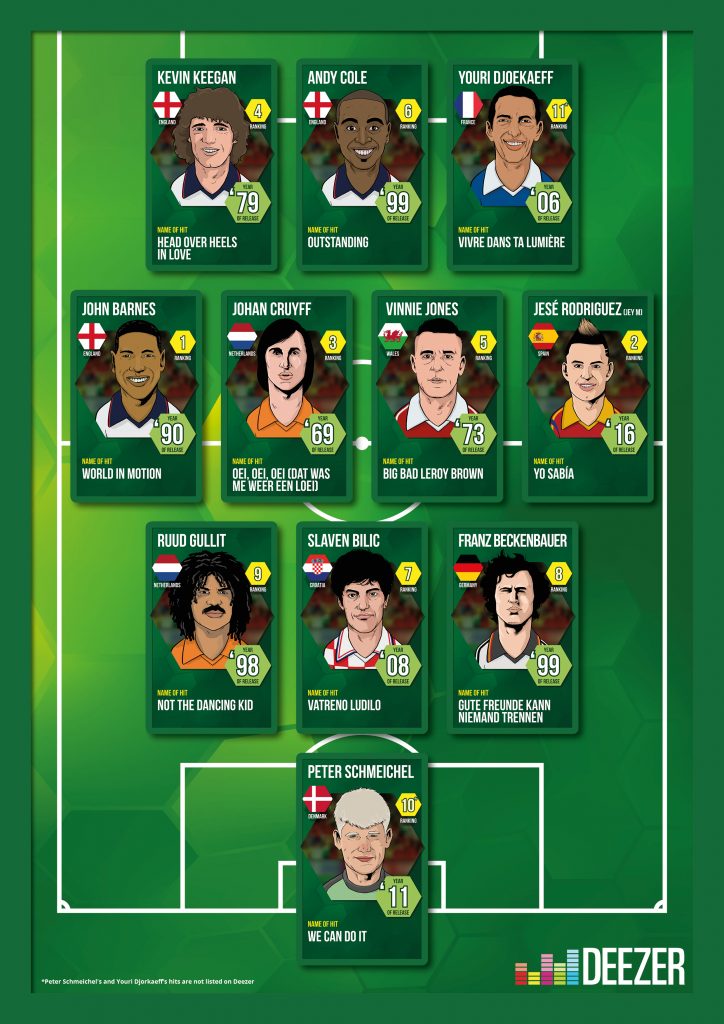 Christian Harris, Deezer UK & Ireland Managing Director says: “While the odds on England winning Euro 2016 may be slim, we know with certainty that England would definitely take home the trophy for the most iconic football song. Who doesn’t remember John Barnes’ World In Motion summing up the 1990 World Cup?”

Deezer don’t just stream music they also stream sport and this summer that includes Euro 2016 coverage. Harris said: “With more live football on Deezer than ever before including all of Euro 2016, we wanted to celebrate some of our favourite football songs from across Europe through the ages with our ‘Deezer 11’.”

Quite why they ignored ‘Liverpool (We’re Never Gonna Stop)’ by the Liverpool FC 1983 Squad is something we’ve not asked them, but it’s track nine on this album of, er, masterpieces.

At least they didn’t mention ‘Diamond Lights’ by Hoddle and Waddle.