After a horrendous season by Liverpool standards that saw the club crash out of Europe as early as possible – twice – as well as making it three years in a row without a trophy and slumping to a sixth place finish in the league it was obvious something needed to change. Brendan Rodgers kept his job but sacked his two assistants, bringing in Sean O’Driscoll in place of Colin Pascoe and creating a new role lower down the first-team coaching staff for Pepijn Lijnders.

Liverpool FC today officially announced two new appointments to Brendan Rodgers’ first-team coaching setup. Although the club are yet to officially announce the departures of former assistant manager Colin Pascoe or former first team coach Mike Marsh, both understood to have been given the news of their sackings whilst on holiday, the Reds have confirmed one of their replacements.

Sean O’Driscoll replaces Pascoe as assistant manager to Brendan Rodgers, with the club yet to announce a replacement for Marsh as first team coach.

O’Driscoll was England under-19 coach before taking the job at Anfield, before which he had been Bristol City manager for just under two years before being sacked with the club bottom of League One with only six points and without a win from 11 games. O’Driscoll had arrived 11 months earlier with the club fighting relegation from the Championship and was unable to save them from the drop.

He was also sacked as manager of Doncaster Rovers in 2011, when after seven games of the season his side had managed a single point. That run followed on from a poor finish the previous season in which he was only able to lead his side to one win from their last 19 games.

The Wolverhampton-born coach was also sacked by Nottingham Forest in 2012, however the club’s chairman said at the time that he “can count himself unlucky to have lost his job with the team just one point away from the top six.”

O’Driscoll’s Forest side included a number of new signings and the chairman stated that although the club knew it would take time for them to settle in, “that process has taken longer than we anticipated,” and that the club was “still searching for consistency in terms of team performance, underlined by the fact that we have not won more than two games in succession in the Championship this season,” adding that they were looking to bring in an ambitious manager with Premier League experience.” 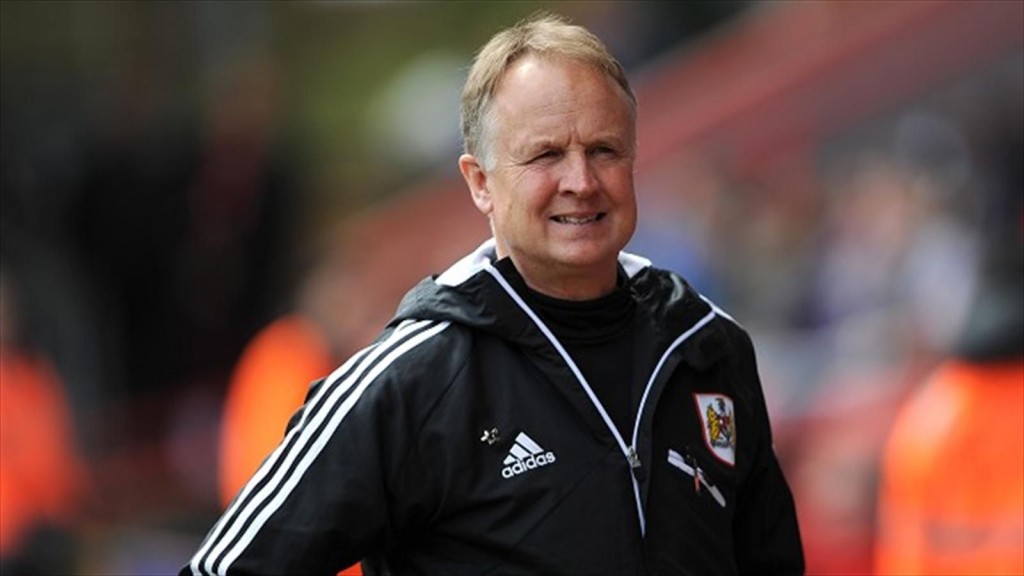 Of course all of those roles were as manager, not assistant manager, and Brendan Rodgers says he is positive and excited to have the former Fulham man by his side: “I have made these appointments because I want to take us in a new technical direction, in terms of coaching.

“I believe the entire first-team set-up will benefit and I am extremely positive and excited about what we can achieve, as a group, going forward.”

There was no mention of Colin Pascoe whatsoever in the statement on the club’s official site and no words of thanks from Brendan Rodgers for a man he had worked with long before he arrived at Anfield.

Rodgers instead focussed on the new boys: “My admiration for Sean, as a professional, is well documented,” said Rodgers.

“He is someone with a clear vision and philosophy and has proved he has the ability to transfer that knowledge, through his coaching, to the players.”

It had been hoped by many Liverpool fans that any replacement for Pascoe would be with someone with experience not only in top-flight football but at the elite end of it, including European experience. Instead Rodgers has replaced his old friend with someone more accustomed to life in the lower leagues. O’Driscoll spent most of his playing days with Bournemouth, which is where he also began his coaching career, including a six-year stint as manager and promotion through the play-offs to what is now known as League One.

Rodgers added: “I am looking forward to working with him and also learning from his experiences and gaining valuable knowledge from his expertise.”

For O’Driscoll it’s quite clearly a bigger move than he could ever have hoped for, as he said in the club statement, although there probably wasn’t really any need to give Ian Ayre a mention: “I am excited to be joining one of the world’s most iconic football clubs. The hallmark of any successful club is its culture and that comes from the people who work there, from the chief executive and first-team manager to those people behind the scenes whose faces may not be known but who are the lifeblood of the club.”

O’Driscoll says he feels welcome at the club and can’t help but notice the desire for success: “From the moment I drove into Melwood last week and was greeted by Kenny the gateman, I could not have been made to feel more welcome.

“If you are going to have any level of success these people are as crucial as the players,” he added. “From my experiences so far it’s clear everyone wants to help this club succeed.”

As assistant manager O’Driscoll will only be asked on rare occasions to deal with the media immediately after a match, which is perhaps just as well if one particular post-match interview as Bristol City boss is anything to go by. 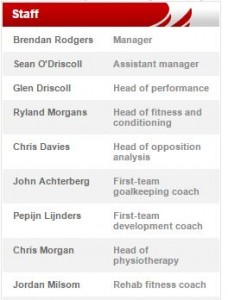 The role for Lijnders, reported in the midst of the club’s apparent information blackout as being the new first team coach, or the manager’s No.3, isn’t quite at the level it was thought to be. The former PSV Eindhoven and FC Porto man, who was in charge of the club’s U16s last season, is to get a role that overlaps between the first team and the Academy. On the official website he is the seventh name down, listed in between the goalkeeping coach and the head of physiotherapy.

Rodgers said: “This presents a fantastic opportunity for Pep and one I know he will grasp with both hands.

“He has excelled at the Academy and I believe this is the perfect time for him to make the step up to the first-team set-up and use his talents for the benefit of the senior squad.

“Pep displays a passion and enthusiasm for his profession that is truly infectious and I believe will have a positive impact.”

The role will see him working with “elite talent” at the Academy as well as with the first team and Lijnders is delighted to be given the chance: “I feel proud and honoured to work closely with Brendan and his staff,” Pepijn said. 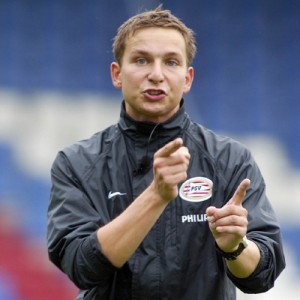 “I couldn’t think of a better attacking manager to assist,” he added. “Everybody knows how I feel about representing this amazing club.”

Lijnders thanked the owners for the promotion: “The owners have a clear and strong philosophy which is based on developing top young players into elite – I want to thank them for giving me this opportunity.

“I had a great first year at the Liverpool FC Academy, I am proud to be part of the team and we will give everything.”

It is reported that Liverpool will be appointing a new first team coach to replace Mike Marsh and it is expected an announcement relating to that will be made before too long. Whether the club and the manager officially acknowledge the efforts of Pascoe and Marsh remains to be seen.

The Reds’ first pre-season game is in just over a week, with the club also announcing today that their new away kit – expected to be white – will be unveiled during the tour. The third kit was unveiled on the final day of the season when the Reds wore it for that 6-1 defeat at Stoke.

Moves to continue to add to Rodgers’ squad continue, with a striker considered the next most important target after Liverpool struggled so badly for goals last season.

After many – but not all – fans called for the manager’s head, are the changes going to be enough to get Liverpool heading the right way again? The season starts in a month, we’ll soon have a good idea.