Suarez story continues through his holidays

AFTER sitting out the last four games of Liverpool’s season Luis Suárez spent the beginning of summer on duty with Uruguay preparing for and playing in the Confederations Cup in Brazil. He’s now on holiday and due to return to club duty on July 22. Will he return?

Whilst over in South America Suárez did a few media interviews, the contents of which have been well and truly covered by the media back in England. Some observers have pointed out examples of dodgy translations and quotes taken out of context that indicate he’s maybe not pushing for a move to Real Madrid quite as much as that coverage suggests. However other observers counter with the fact he’s hardly told Real Madrid they can just do one.

The main facts are that Suárez has a contract with Liverpool, one that reputedly contains some kind of clause obliging LFC to let him speak to any club that makes a major offer for him, and that any other club interested in him has to pay whatever the price is that Liverpool find acceptable before they can get him. The clause is reportedly triggered if an offer of £40m is made but does not oblige Liverpool to accept that offer. 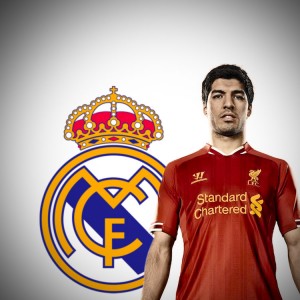 Which badge will Suarez have on his shirt next season?

If football was a game full of honourable people who always played by the rules – off the field as well as on it – Luis Suárez would have no idea if other clubs were interested in signing him. An interested club would contact Liverpool, who would then decide whether they wanted to do business, before Suárez was told of that interest.

Football isn’t like that of course so clubs can let players know of their interest quite easily without any realistic fear of punishment for what is essentially an “illegal approach”.  Even if they don’t contact the player directly there are plenty of intermediaries to do it for them.

According to today’s Echo Suárez’s agent has been in Liverpool to discuss his client’s future. Pere Guardiola met Ian Ayre at Chapel Street and Brendan Rodgers at Melwood. The Echo were told that the discussions were “both ‘positive’ and ‘amicable’.”

There was nothing from Guardiola to dismiss the comments from Suárez that he’d drop everything to go to Spain if Real Madrid came calling but the agent didn’t arrive armed with a transfer request either. As things stand the ball remains in Real Madrid’s court – Liverpool continue to assert that they want Suárez to stay and honour his contract, which still has three years to run, and Suárez is yet to ask for a move.

The meeting took place a matter of hours after a reported £30m Arsenal offer for the Uruguayan was turned down emphatically by Liverpool FC. Arsenal’s offer is way short of Liverpool’s valuation, believed to be upwards of £45m, and is likely to be their only offer.  Arsenal have their sights set on a £23m move for Real’s Gonzalo Higuain but the move is taking a long time to conclude and Arsene Wenger is now being linked with other targets, including Manchester United’s Wayne Rooney.

When the season starts Suárez will have the remaining six games of his ban to serve before he can play his first game of the season, a situation that will hardly leave Real feeling there is any kind of rush needed to see the deal done. The remainder of that ban is likely to go with him if he leaves to join another European club.

When Suárez’s holiday is over the Liverpool squad will be down under ahead of their pre-season game in Melbourne on July 24. He may not be expected to play much, if any, of that game but the club would have wanted him to play a big part in the publicity and PR surrounding the trip.

For Brendan Rodgers the concerns won’t be about how many photo-calls and signings sessions Suárez can do but about whether or not he can include him in his plans for next season.

If Suárez’s Uruguay team-mate Edison Cavani  is to be believed the problem for Suárez is that Rodgers’s plans for next season don’t include any Champions League football.  “Luis has to be playing Champions League football,” Cavani says. “When you have the most complete striker in the world not playing in the top competition in Europe then you know something is not right.

If an offer does come in it won’t necessarily be an easy decision for Suárez: “I can tell you his love for Liverpool is very real,” says Cavani. “If they were playing in the Champions League he wouldn’t consider leaving, but he knows he is now at the stage of his career where he needs to be playing at the top level.”

There’s a bit more mileage in this story yet and a good chance that Luis Suárez will still be a Liverpool player when his ban comes to an end in the autumn.