We have to accept FSG's way of thinking, it's the least they deserve.

Since the sacking of Kenny Dalglish as Liverpool manager by Fenway Sports Group debate between supporters has been often heated as stories circulate about what happens next for the club in terms not only of manager but also in structure, with concerns raised at the continued lack of any visible progress on the stadium. Not all fans trust FSG to do the right thing, or for them to be receiving the right advice, but not all fans are troubled by the way they are going about running the club. One fan asked for the platform to put his side of the argument forward and we were happy to do that.

FIRST things first, sorry to Jim for constantly calling him ‘Mr Doom’ on Twitter. I just take a rather more positive outlook on what seems to be the FSG philosophy.

When FSG rolled into town it was always my belief that they had a philosophy in baseball that was spearheaded by a youthful manager/coach. Of course at that time we had the pleasure of watching what has to be the dullest football I have seen at Anfield in my 23 years of following Liverpool. People were already growing increasingly frustrated by Roy Hodgson’s tactics and awful style of football when FSG took ownership of the club.

It was of great relief and also joy for us all when Roy was replaced by Kenny. Although a temporary measure it was always going to be difficult for FSG to appoint their own man that fitted within their philosophy if Kenny had a successful stint as ‘caretaker manager’ as surely he would keep the job full time if successful. 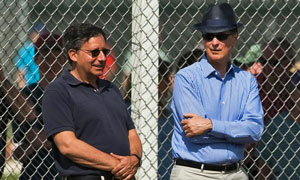 Kenny did many great things in those first five months, for me personally it was a dream seeing us play a style of football I had almost forgotten we were capable of playing. Pass and move at its very best. Fulham away toward the end of that season was something else.

This season I walked out of Anfield many times trying to work out how we didn’t win games. The football was still being played in the right way and of course the cup runs were fantastic.

In my opinion the main two reasons Kenny was (wrongly) sacked:

1. Our league form dipped alarmingly after we lost that crucial game at home against Arsenal, a game we totally dominated as par for the course.

2. The way Kenny came across with the press, not just regarding the whole Suarez incident (which was dealt with poorly by the club and the FA and actually everyone concerned including the ‘victim’ Evra) but just in general. Personally I felt uncomfortable watching certain interviews and I am one of Kenny’s biggest fans so i can only presume FSG felt the same.

Finishing 8th and so far from the top 4 was the ideal opportunity in their eyes to show Kenny the door and start to implement the plan I am sure they wanted to start 12 months earlier.

So we now find ourselves in a situation where lots of fans have an opinion on who they would like as their manager. For me it’s been fairly obvious since the day Kenny was shown the door that FSG would follow their own philosophy of bringing in a young up and coming manager rather than a proven older manager. 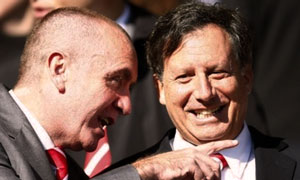 Personally I would have loved to have seen Jurgen Klopp take over. A young proven winner on a modest budget would be a perfect fit for the FSG way of thinking. Sadly it seems that won’t happen so who are the alternatives? Obviously Roberto Martinez seems to be the clear favourite. I admire Martinez a lot. He conducts himself superbly and plays a style of football pleasing to the eye. The main risk is he is now manager at Wigan and LFC is a different kettle of fish from Wigan. Can he handle the pressure? I’d like to think so but one thing is for sure it will be a hell of a lot easier if he has the full the support of the fans. Let’s follow Martinez’s lead and conduct ourselves in a manner which befits our great club.

I fear we as fans are turning into Aston villa fans. Let’s not allow that to happen. Please.