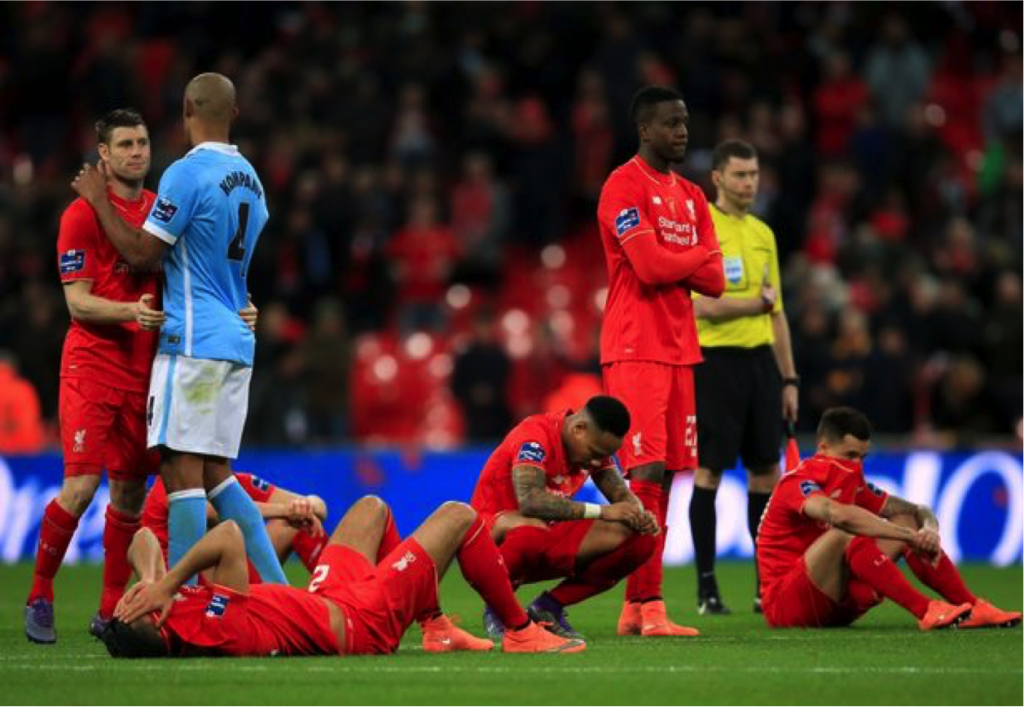 Sam May was at Wembley Stadium for narrow victory for the Sky Blues.
Liverpool fans were left to hold their head in their hands after seeing Manchester City secure the Capital One Cup by the narrowest of margins.
Two second half goals from Fernandinho and Phillipe Coutinho shared the spoils after normal time, with the game going to a penalty shootout.
Sergio Aguero had the best chance of the game on 23 minutes when he skipped past Mamadou Sakho – only to see his low effort tipped onto the post by Simon Mignolet.
Liverpool grew into the game in the second half and showed signs that they could take the lead, but the Reds failed to create enough chances.
Yaya Toure stood out in the midfield for Manuel Pellegrini’s men and calmly slotting his winning penalty in the bottom left corner past Mignolet showed why he’s been the driving force for Manchester City.
But what did we learn? Sam May was at Wembley…
1. Liverpool can’t take penalties
It was the worst set of penalties probably ever seen at Wembley. There was a glimmer of hope for the Reds after Emre Can calmly chipped Willy Caballero and Fernandinho’s spot kick hit the post.
Man of the match for Liverpool – Lucas stepped up to press home Liverpool’s advantage, only to see his well taken spot kick spectacularly saved by the 32-year old Caballero, diving to his left. That was it for Liverpool as they fell apart with further misses from Coutinho and Lallana.
2. Possession wins you nothing
Despite Liverpool having 64% to Manchester City’s 36%, it clearly showed with no cutting edge the possession was wasted. Klopp’s men made ‘pretty patterns’ – but they don’t win you matches. They certainly don’t win you cup finals.
Having had just 10 shots in the match, the Reds found it hard to hit the target having found it once – Coutinho’s equaliser in normal time.
It was just not good enough, despite the spectacular support from the travelling Kop.
3. Liverpool’s best centre half is Lucas
Klopp needs to ensure the Brazilian is pencilled in first at the back.
The way the 28-year old marshalled the defence, shackled Aguero and played his heart out for the badge was a throw back to true Liverpool players. A pity his penalty was saved.
4. There is no spine to the team
Unlike Manchester City, who have Vincent Kompany, Yaya Toure and Sergio Aguero as their spine, Liverpool have no commanding player in each section of the pitch. Defence, midfield and attack.
Klopp is lacking leaders as it’s clearly evident that he needs to dip into the transfer market in the summer. Yes, he already has Joel Matip on board but the 46-year old will have to sign a new midfielder or two and another centre back.
5. Benteke has no future
With the game crying out for some muscle to put Kompany and Otamendi under pressure, Liverpool’s £32.5 million striker was left warming his hands on the bench.
Obviously, Brendan Rodgers’ panic buy will go the same way as Andy Carroll. Having made 31 appearances in all competitions, he has bagged just seven goals. However, with Kompany just back from injury and the City defence tiring it’s a mystery as to why a target man was not employed to feed off the excellent wide work from both Liverpool flanks.
Finally… The two teams meet again on Wednesday night at Anfield. Klopp should now use the youngsters as the Reds have nothing to play for in the Premier League.
He should save the regular starters for the UEFA Europa League double header against Manchester United – as this is all that is left to play for this season.