Boston-based Fenway Sports Group, owners of Liverpool Football Club, openly apologise to fans and admit they got it very badly wrong on ticket prices, not only reverting the changes announced last week but also announcing a series of further positive changes to their ticket pricing policies. A victory for common sense and the ‘normal’ fan. 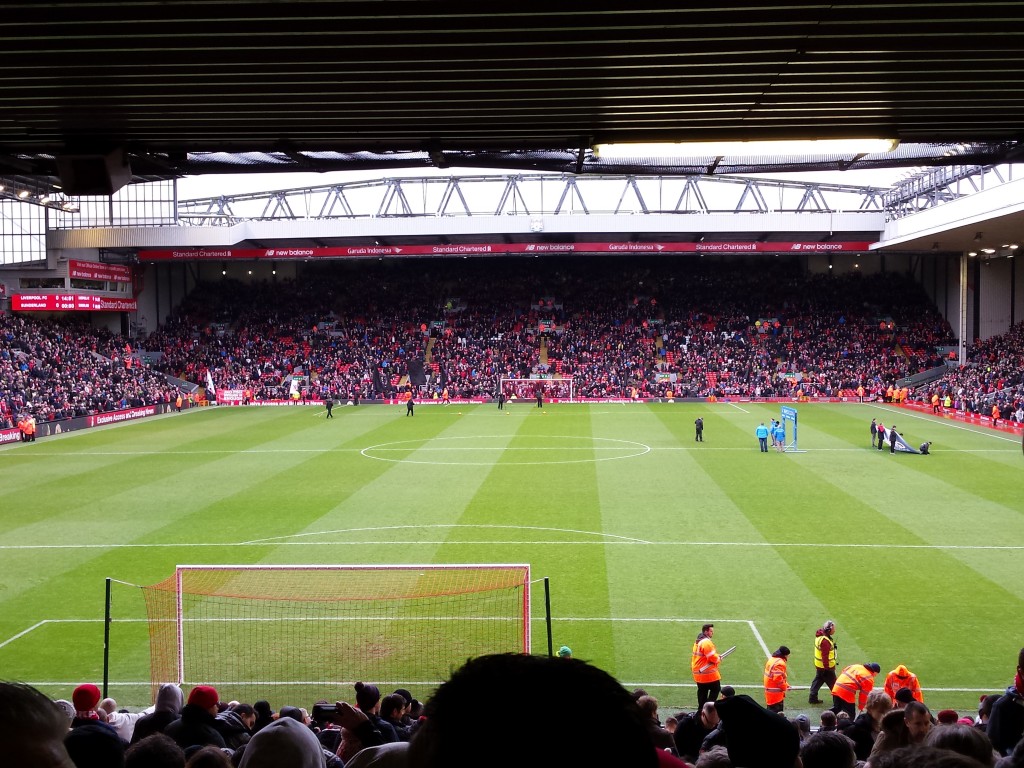 Black flags were flown on the Kop in place of the usual sea of Red and White. After 77 minutes over a quarter of the fans walked out.

Liverpool owners Fenway Sports Group tonight apologised to Reds supporters for the distress they admit they caused to the club’s fans when the club announced massive price hikes to ticket prices for next season. In an astonishing u-turn FSG have not only rescinded many of those price rises but have extended some of the more palatable offers they made at the same time.

When the announcement was made last that Anfield was to have general admission tickets going on sale for club record £77 in 2016-17 the anger was instantaneous from large pockets of the support. Fans groups announced that there would be a walk out on 77 minutes – a significant number both in LFC history and in terms of that ridiculous new ticket price – and cynics didn’t expect it to be taken up by very man fans or to make a big difference.

An estimated 10,000 fans left the stadium when the 77th minute arrived – after renditions of “Enough is enough” aimed at their club’s owners and “You’ll Never Walk Alone” at the team they had to heartbreakingly leave behind.

Last week Ian Ayre put himself in front of the cameras to talk about the price rises in about as patronising a way as even he could manage, shortly after the club had made it clear reporters weren’t to ask manager Jurgen Klopp for his thoughts on the mess.

Today Ian Ayre was left out of it, today it was head office on the US East Coast that wanted to do the explaining – and the apologising, and the massive attempt to put things right.

It was Fenway Sports Group themselves who said sorry and explained what they had decided to do to replace last week’s awful plans. The three men listed on the club’s official site as having at least a 10% share in the ownership of the club, Principal Owner John W Henry, Chairman Tom Werner and President Mike Gordon, sent the message to the club’s fans.

Their statement was released on the club’s official website and is reproduced in full here:

It has been a tumultuous week. On behalf of everyone at Fenway Sports Group and Liverpool Football Club, we would like to apologise for the distress caused by our ticket pricing plan for the 2016-17 season.

The three of us have been particularly troubled by the perception that we don’t care about our supporters, that we are greedy, and that we are attempting to extract personal profits at the club’s expense. Quite the opposite is true.

From our first days as owners we have understood that serving as custodians of this incredible institution is a distinct privilege and as such, we have been driven solely by the desire to return LFC to the pinnacle of football. In the world of modern football, growing the club in a sustainable way is essential to realising this objective.

To that end, we have never taken a single penny out of the football club. Instead we have injected vast sums of our own money to improve the playing squad and modernise LFC’s infrastructure – exemplified by the £120million advance from FSG to build the new Main Stand. This massive undertaking was made in order to provide more supporters access to Anfield and also to produce additional revenue to help us compete financially with clubs that have greater resources. When it opens in August this year, the stand will accomplish those goals, thereby fulfilling a promise we made upon acquiring LFC in 2010.

We were strongly engaged in the process to develop the ticketing plan for 2016-17. We met directly with representatives of LFC’s Supporters’ Committee and along with LFC management, wholeheartedly agreed with major concerns raised, notably: access for local and young supporters; engagement and access to Anfield for local children; access to Premier League matches for those in Liverpool most challenged by affordability.

We believe the plan successfully addressed these concerns and are disappointed that these elements have been either lost or, worse, characterised as cynical attempts to mask profiteering in the plan as a whole. Rather, we prefer to look at them as the parts of the ticketing plan we got right.

On the other hand, part of the ticketing plan we got wrong.

In addition to the other elements of the plan we proposed price increases on a number of tickets. These pricing actions generated growth in general admission ticketing revenue on a like-for-like basis exclusive of revenue from newly-added GA seats.

We believed by delivering a vastly improved seat offering in what will be the newest stand in English football, concentrating the price increases on those tickets typically purchased by fans least sensitive to affordability, and for LFC to begin repaying the £120million advance from FSG for the new Main Stand that these increases were supportable even in the context of growth in revenues from the new Premier League TV deal.

However, the widespread opposition to this element of the plan has made it clear that we were mistaken.

A great many of you have objected strongly to the £77 price level of our most expensive GA seats and expressed a clear expectation that the club should forego any increased revenue from raising prices on GA tickets in the current environment.

After an intense period of consultation with LFC management we have decided to make major revisions to our ticketing structure for 2016-17:

We would hasten to add that the other initiatives announced last week in the 2016-17 plan will remain:

As a sign of our commitment to this improved ticketing structure, we are further announcing that this plan shall be in effect for both the 2016-17 and 2017-18 seasons. For the next two seasons, LFC will not earn a single additional pound from increasing general admission ticket prices.

We believe we have demonstrated a willingness to listen carefully, reconsider our position, and act decisively. The unique and sacred relationship between Liverpool Football Club and its supporters has always been foremost in our minds. It represents the heartbeat of this extraordinary football club.

More than any other factor by far, that bond is what drives us to work tirelessly on behalf of the club and its future. We have great conviction in our world-class manager and our young, talented squad and know that in time the on-pitch success we all crave will be realised.

We look forward to sharing in that success with you.

Now if they could just see their way fit to addressing the problems with player recruitment…. 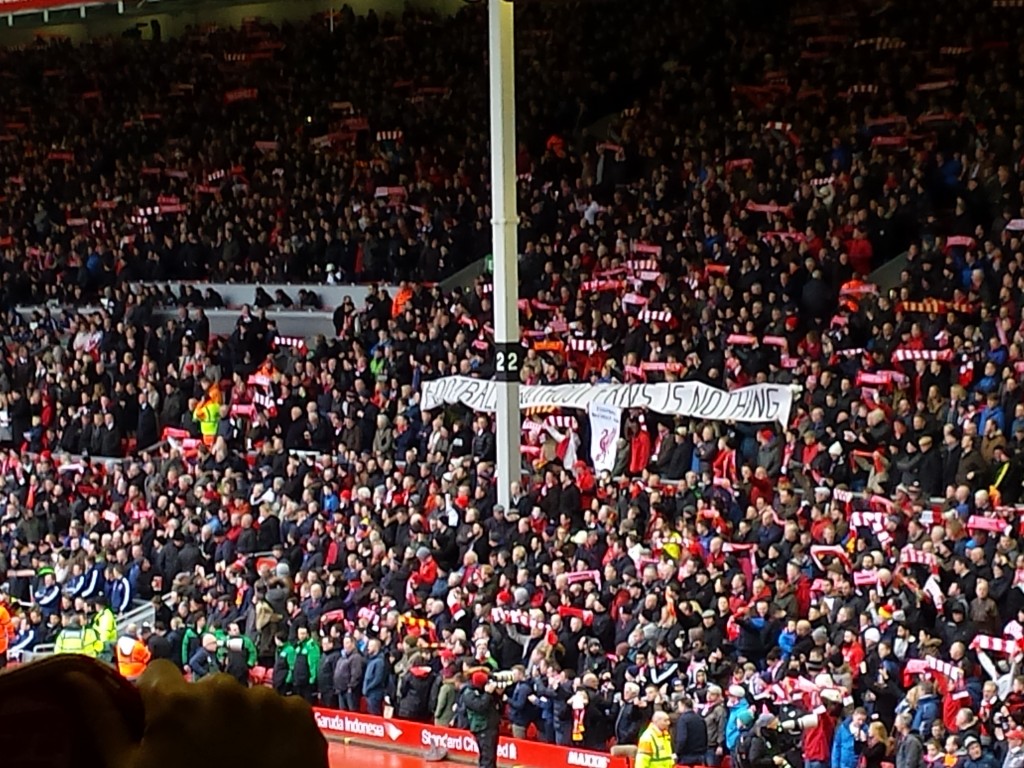