Jason McAteer, former Liverpool and Ireland player, was nicknamed ‘Trigger’ during his playing days and he doesn’t seem to be in any rush to rid himself of the tag.

His nickname is a reference to the character ‘Trigger’ from Only Fools and Horses, a man who wasn’t at the top of the league table for intelligence, and Jason has admitted in the past he had done enough to earn the title for himself.

One example was the time he was with his teammates ordering pizza: “They asked if I wanted a whole pizza cut into four or eight and I said four because I’d never eat all of it,” Jason recalls.

Was he really as daft as he seemed to be? Maybe not: “In football, everyone gets an image and I always found that by having this slightly dim-witted one I could get away with murder.

“It also helped me play more matches – managers mostly saw me as a happy-go-lucky person and wouldn’t bother me. Because I didn’t mind where I played, I’d never be an issue when they were worrying about team selection.”

So if it was all a bit of an act he’d have no problem with something as simple as, say, recording a quick video message on his phone, would he?

Jason is taking part in a special golf and football event in Dubai next month along with some other former Liverpool players, Didi Hamann, Robbie Fowler and John Aldridge. One of the event’s sponsors, Dubai Eye 103.8, thought it would be good if Jason could record a very short video clip on his phone to help promote the event.

Four months later, and despite regular nagging from his agent, there is still no video. 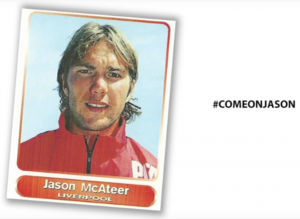 This isn’t a case of trying to programme a VHS video recorder to tape Coronation Street or trying to work out which items count as part of the Meal Deal down the supermarket. You just press record on your phone camera, basically.

Even five-year-old April and seven-year-old Sam – Jason’s agent’s kids – managed to do a video.

But Jason couldn’t manage it.

The only way anyone can see Jason recording the video now is if as many people as possible show him just how easy it is.

Record a quick clip of you, with your mates if you like, urging Jason to record the video. The funnier the better but, as Jason keeps being told, it doesn’t have to be spectacular.

When you’ve done it upload it to social media with the hashtag #ComeOnJason and maybe he’ll finally record one himself.