Liverpool players Raheem Sterling, Emre Can, Simon Mignolet and Fabio Borini all met a group of teens from the Kicks Programme as part of a Warrior and LFC Foundation event to celebrate the great work the Programme does and to help raise awareness. Warrior Football has donated £50,000 worth of apparel and equipment to Liverpool FC Foundation to distribute to community charities locally and overseas, with the Kicks Programme being one of those who benefit from this donation. 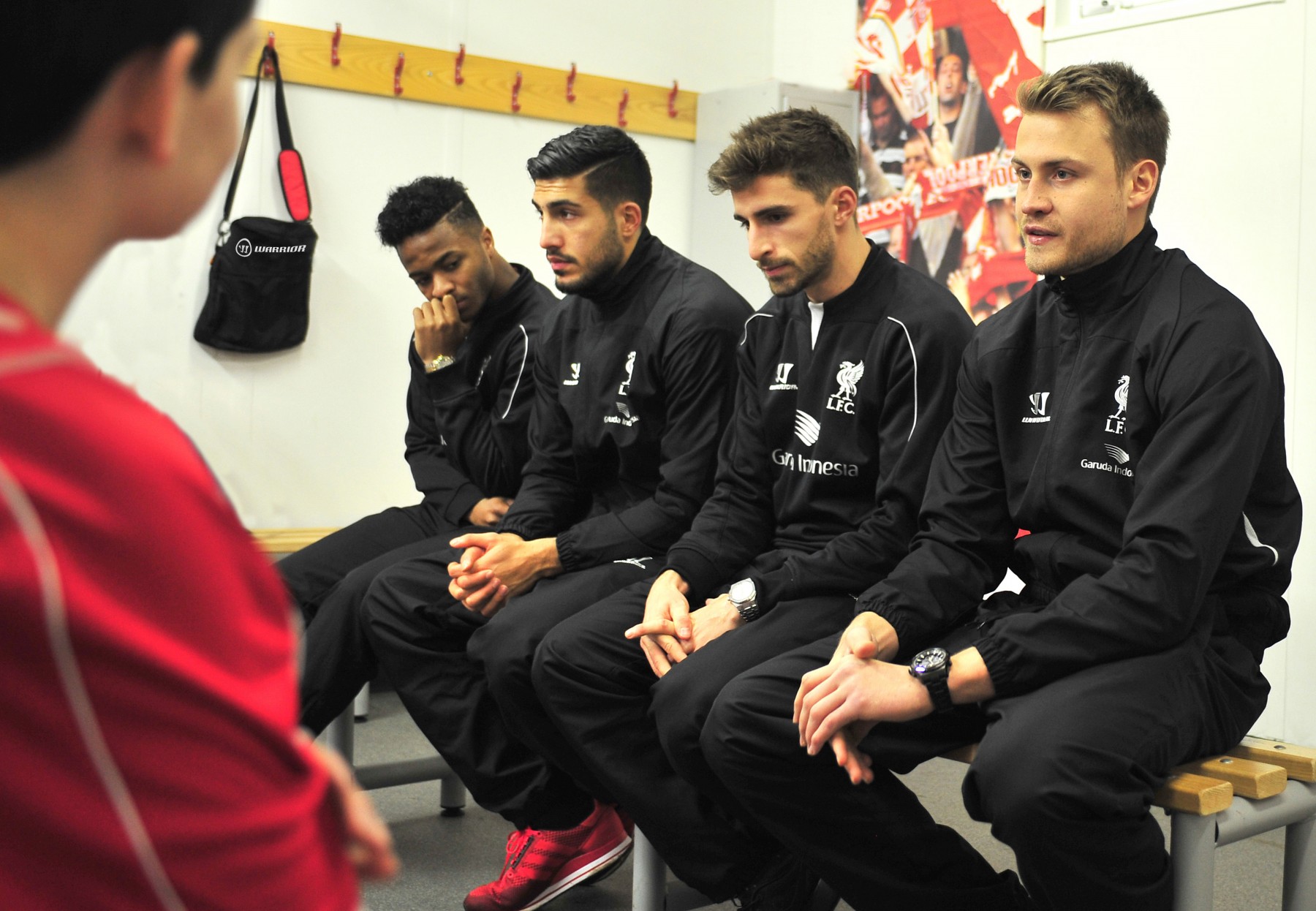 Watch the video below to see the quartet answering their questions.

Q: What did it feel like to score your first goal for Liverpool against Chelsea?

A: “Was a great feeling and was very happy”

Q: What is the best save you have ever made and why

A: “Difficult question. Making saves that help the team is the best feeling. When you know that you’ve made a save that has given the team three points or a victory. It does not happen often that you can affect the game as a goalkeeper but when it does like a penalty save, the one on my debut against Stoke for example in the last minute and we won the game, they’re my favourite and most important.

Q: Whose the best player you have ever played with?

A: Raheem! “I have played with a lot of good players on international duty like Totti, Pirlo, Stevie G, Drogba and the chance to play with all of them was special.”

Q: What was it like going out in the World Cup so early ?(CHEEK!!!)

A: “Disappointing to go home early but we’re a young side and it was good experience and something we will learn from for future tournaments.”

Q: Best Player you have come up against

A (FB)- Thiago Alcantara – “Two games that I remember, the player was uncatchable, did whatever he wanted to do with the ball. He was a very difficult player to play against.”

A: (SM)- C.Ronaldo – “It speaks for itself. He’s the best player around. His shot is so powerful. The first save I made, although it was a fairly routine save, I had never felt the ball hit my fist so hard.

Q: Being at such a young age what was it like with the pressure to perform at the World Cup?

A: “Didn’t think about it or put myself under any pressure, I just tried to enjoy my football as I’m always trying to do and become a better footballer.

Q: Best goal you have scored for Liverpool and why?

A: “The one against Man City at Anfield because at that point we were still in the title race and was a very important goal.”

Q: If you weren’t a footballer, what would you be?

A (SM): “I have a degree in Belgium so might have done something with that or the army like my dad.”

A (EC): “Water boy. I didn’t have any plans other than football.”

A (RS): “Would have done something to do with sport like athletics.”

Warrior Football donated £50,000 worth of kit to the Liverpool FC Foundation to distribute to community charities locally and overseas. The Foundation’s programmes encourage people of all ages, ethnic groups and disabilities to take part in team sports as a fun and healthy platform to develop life skills such as confidence building, motivation, and teamwork.