WITH demolition work underway on former homes near Anfield’s Main Stand ahead of redevelopment of the area and ground, Liverpool FC have announced some changes to access to the stadium on matchdays. 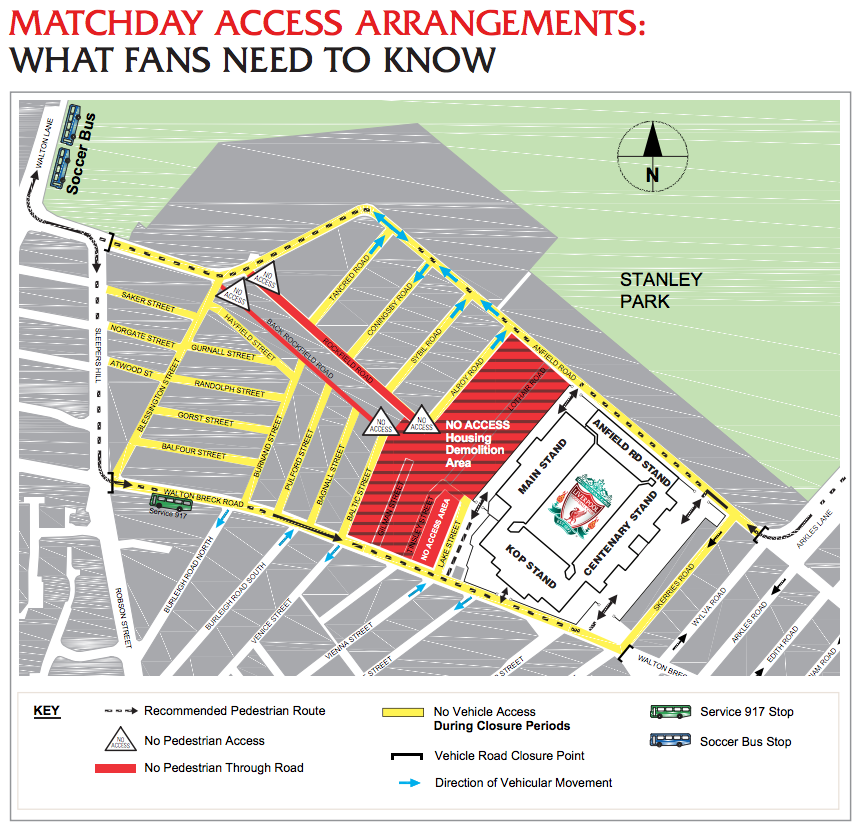 Fans making their way to Anfield can expect to see some significant changes around Anfield stadium as part of the regeneration plan for the area.

The current work and erection of construction hoardings adjacent to the Stadium means that pedestrian access via Rockfield Road, Back Rockfield Road and Lothair Road will no longer be accessible by foot or vehicle.  Fans will be rerouted via Anfield Road and Walton Breck Road.

While work is ongoing LFC would like to ask fans for their support by keeping to the designated pedestrian access roads and allow extra time to get to the stadium.

New signage will be positioned around the stadium to direct fans and additional stewards and police officers will be present on matchdays to help reroute pedestrians and vehicles to minimise disruption.

Those residents without parking permits travelling to and from their homes on a matchday by taxi are advised to carry some ID which displays their name and address details to show to the matchday stewards, ensuring access is permitted.

There will be no changes to car parking access and facilities, taxi drop off points or key bus services including Merseytravel’s Soccer Bus and 917 services.

The Club is encouraging all fans to plan their route to the stadium in advance of the Borussia Dortmund fixture at Anfield on August 10th and to allow extra time for their journey. All fans are advised to be at the stadium 30 minutes prior to kick-off.

Map and key information on the changes can be found here – http://www.liverpoolfc.com/travel/getting-to-anfield

LFC will continue to advise supporters and local residents of any changes that may affect access to Anfield Stadium.