The Premier League’s top scorer, currently on 17 goals from just 11 league appearances, has committed himself to the club in what is described as a “new extended deal”, putting an end for now to any speculation about his future. 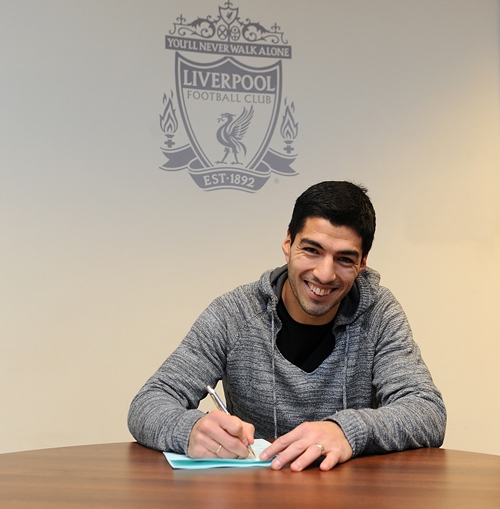 In the statement announcing the deal Suárez said: “I’m delighted to have agreed a new deal with Liverpool and have my future secured for the long term,

“We have some great players and the team is growing and improving all the time. I believe I can achieve the ambitions of winning trophies and playing at the very highest level with Liverpool. My aim is to help get us there as quickly as possible.”

According to Suárez the supporters have played a part in his decision to extend his deal beyond the two-and-a-half years previous left on it: “Without doubt the backing I have received from the Liverpool fans has influenced my decision.”

He went on: “I am so proud to represent them and go out to do my best for them every time I pull on the shirt. We have a special relationship; they have love for me and in return I love them back. I will always do my best for them and hopefully we can achieve success together.”

Reds boss Brendan Rodgers was unsurprisingly pleased with the announcement: “This is fantastic news for everyone associated with the club; the team, the owners and most importantly the supporters.

“Luis is a world-class talent and securing his services is crucial for what we are trying to achieve here.”

Suárez is set to spend the peak of his career at Anfield, something Rodgers was also glad about: “What’s most important and most exciting is that, at just 26 years old, his best years are still ahead of him and we now know we’ll be seeing him reach that potential in a Liverpool shirt.”

There was delight too from the club’s owners. John W Henry said: “We are committed to working hard to keep our best players and this is an indication that we are moving in the right direction and moving at a pace that impresses one of the best players in world football.”

According to Henry, this is part of a plan to bring success back to the club: “The club has made major strides forward in recent years and we are all committed to delivering the success our supporters want and deserve.”

His fellow owner and club chairman, Tom Werner, said: “This demonstrates our commitment, as an ownership group, to building a team that competes at the highest level both in the Barclays Premier League and in Europe.

“Our primary motive is to do what is best for Liverpool Football Club and today’s news is another significant step forward on this journey,” said Werner.

Where there’s a player as good as Luis Suárez there will always be speculation, even after him signing a new contract, but this deal sends out a message that if it was going to be difficult to prise Suárez away from Anfield before it’s going to be near to impossible now.

Arsenal were laughed out of Anfield in the summer after making a reported bid of £40,000,001 but there was always a sense that Real Madrid might come in at a later date, having spent last summer focussing on their move for Gareth Bale. The new deal significantly limits the possibilities of that.

The new deal also shows Liverpool’s intentions, they did what was needed to ensure Luis Suarez stayed at the club, it marks a massive turnaround from the disappointment felt throughout the club at the end of last season. Suarez was down about missing out on the Champions League but so were the fans.

The timing is also important, coming shortly before the January transfer window it means there will be fewer distractions from transfer speculation over the Christmas period and into the New Year.

What Liverpool really need to do now is show the same focus and determination on acquiring new players of their own in that window, the squad needs to be strengthened for the rest of this season as well as in preparation for what all at the club hope is Champions League football next season.