"Steven Gerrard, Michael Owen and… Me"

WITH the club having such an illustrious history it’s hardly surprising that there are so many books about Liverpool FC, whether it’s books on certain eras or certain managers, certain tournaments or certain players.

One book that is slightly different is “Steven Gerrard, Michael Owen and… Me”, by Mike Yates. 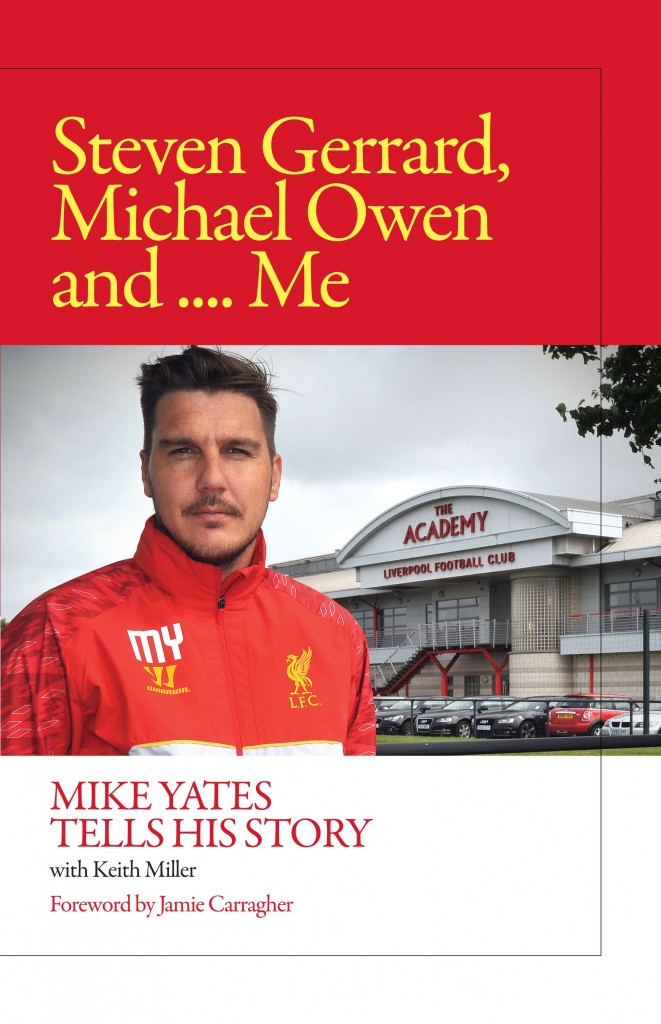 Mike lived the dream all Liverpool fans had as kids, that dream of playing football in that shirt on that pitch at Anfield. He grew up a blue – like Jamie Carragher, Michael Owen and Steve McManaman amongst others – but once he’d signed for the Reds as a youngster he was as excited as any Liverpool fan about what it could lead to.

In the end it led to a certain amount of disappointment as eventually the day would come that Liverpool would tell him his future lay elsewhere, at least on the field. At the same time as telling him his Reds playing days were over, Steve Heighway offered him a role as one of the first full-time coaches at the newly-created LFC Academy.

Mike combined his role at the Academy with playing semi-professional for Burscough FC and it was whilst playing for the Lancashire side that he got spotted by a scout from Dundee FC.  He signed for the Scottish side, for a club record fee, and played in the Premier League north of the border for three years.

He returned to the Academy in 2001, spending ten years looking after players in the age ranges from under-10 to under-13. Today, in his 23rd year at the club, he works for the LFC International Academy.

The book is a compelling insight into the life of a would-be professional footballer, detailing the time from when Mike was first spotted playing in teams with kids much older than himself through his time as an apprentice and how close he came to that first team.

For those of us who had those dreams, for kids who have that dream now, this book is something different to the stories of those who got the breaks and made the grade in the high-profile world of Premier League football.

Mike would go on to spending his life serving Liverpool Football Club, and still does 23 years later, just not quite in the way he imagined when he first told his schoolmates he’d signed for the club.

To get a bit more of a taste for the book, Mike’s kindly provided us with this extract. Details of where to get the book can be found below.

My Daily Routine as a YTS Football Apprentice

As a YTS Apprentice, my jobs around Melwood weren’t only limited to the mornings. The minute that training finished, I then had to start looking after the staff kit, including collecting and cleaning all of their boots. I can still picture myself walking along the corridor, through the first team dressing room and then into the boot room, with ten pairs of boots hanging around my neck, all tied together by their laces so they didn’t get mixed up. Ten pairs of boots to clean! Luckily for me, it was something I actually enjoyed doing. The first challenge was to get all the mud and grass off with a wire brush, wipe them down with a damp cloth and then give them a really good polishing; including the soles, which also had to be spotless. And if the boots were ever a bit hard from having been used in wet conditions the previous day, then before I even started to clean them I’d have to smack them on the floor a few times until they softened up.

Ronnie Moran had a habit of regularly popping his head into the boot room while I was in there to constantly remind me to put a ring of dubbin around the soles of the boots, so they wouldn’t crack. He wasn’t just making sure I did a good job; he was also emphasizing the high standards that existed at the club. It was another example of the Liverpool Way being filtered down through the club. All of our coaches would find subtle ways to teach us simple lessons in life whenever the chance cropped up; like Hughie McAuley frequently looking under pipes to see if we’d cleaned them properly, while repeating his favourite football mantra, ‘If you’re lazy off the pitch, then you’ll be lazy on it!

After I’d finished the “staff” boots, once they were all in spanking clean condition, I’d take them all back to their dressing room and place them carefully next to each person’s own speck, ready for the next day. As soon as all that was done then I’d leg back to the first team dressing room and get Jamie Redknapp’s boots to clean them too, as I’d been assigned to look after his kit. I used to clean his boots the same way as I did my own, including really buffing them up by using my shirt to get a brilliant shine. He was always happy with the end result. At the same time that I was doing my jobs every day after training, some of the other lads would have their own things to do as well, such as tidying up the dressing rooms and the medical room. I was much happier doing the kit and boots!

Although Jamie Redknapp was my main responsibility, I’d occasionally have to look after the boots of other players as well, particularly Jason McAteer. To give you an idea of just how demanding but fun the life of a YTS player could be back then, there is an interesting story about a time that Jason asked me to break in a pair of new boots for him at very short notice.

Late one Friday afternoon, after training at Melwood, he walked right past me in the corridor carrying three boxes of boots. Then, almost as an afterthought, he suddenly turned back and tossed a box of Reeboks to me: ‘Hey Yatesy, do me a favour mate and get them ready for me for tomorrow’s game.’ Well, OK, no problem; except that I had an away game to play at 11 o’clock in the morning for the A Team at Manchester United and he was playing at Anfield at 3 o’clock in the afternoon against Middlesborough!

In the end I had to wear his boots to play in my game against United. Then, as soon as our team coach got back to Melwood, I had to dive off and rush to the boot room, clean the boots to the normal high standard, write the initials JM on the back in marker pen and then somehow get them across to Anfield in time for the kick-off. I didn’t drive in those days and I couldn’t get a lift from anybody, so the only way I could travel was on the public bus. It was sheer madness really. In the end I sprinted to the bus stop, shoved myself onto the first bus that came along, jumped off at the nearest stop to Anfield and then made a frantic dash to the ground.

To the shock of the security guard, who fortunately knew me, I burst through the Players Entrance, ran to the Home Dressing Room and slid inside just in time to place Jason’s sparkling new, but now supple, boots neatly in his speck before he walked through the door. The joke is I never actually got to see him, so he had no idea whatsoever of the trauma I’d had to survive to get those boots to him on time. I didn’t even get a tip! But the only reward I really needed was to go up to my seat in the stands and later watch Jason McAteer play a good game for Liverpool in the same boots that I’d played in that morning.

As apprentices, we were paid a YTS allowance of around £42 per week. Compare that to everything that the kids are paid and given today! It sounds totally ridiculous to say this now, and I am literally laughing as I write it, but we were also rewarded with a bonus for good results in the A and B teams: we got £1.50 for a win and 50p for a draw! Unbelievable in this day and age!

One day, quite early on in our YTS, we were all in the middle of a team meeting when Hughie McAuley made some casual comment about it being Pay Day. Quick as a flash, Stevie G came out with a cracker: ‘Pay Day? Yeah, good one! I’ll nip into town, buy a new pair of trainers, have enough left for a Big Mac and then I’m skint again!’

“Steven Gerrard, Michael Owen and… Me” by Mike Yates is available now from Amazon, Waterstones and official Liverpool FC stores. More details can be found at www.mikeyates.co.uk.