ONE way or another, Andy Carroll is on his way out of Anfield. From a Liverpool point of view nobody is going to be able to turn that departure into a positive story. Short of an unexpected and extremely unlikely bidding war Liverpool are going to lose a substantial amount of money on the player – and that’s if they sell him. It may well turn out that the player goes out on loan and if that’s the case the Reds will almost certainly find themselves subsidising his reported £80,000 per week wages.

Rumours of Carroll going to Italy had been circulating ahead of last week’s press conference held to discuss the Reds’ upcoming tour of North America. Manager Brendan Rodgers was asked about Carroll’s future and if anything his answers suggested there and then that Carroll wasn’t going to be Liverpool’s number nine much longer.

What were his thoughts on stories linking Carroll with a loan move to AC Milan? “He’s a good player Andy,” said Rodgers, pausing before adding, “So he’ll always be linked whether he’s here or not.” Standard practice in answering those types of question is to say how outstanding  the player is and how it’s no surprise to hear he’s been linked with other clubs but that’s usually followed with a firm ‘hands off’ message stressing the importance of that player – even if the club do want to get rid. But Rodgers didn’t answer in the standard way.

“Listen, I’ve spoken to Andy on his holidays so he knows exactly where he stands, I’ve had a chance to speak to a lot of the players.”

Still no ‘hands off’, but a bit more bigging up of the player: “He’s a very good young player and he’ll be linked with clubs like that because he is such a good player.” Had AC Milan inquired? “I haven’t, I haven’t had anything at all from them, no.”

Asked directly if Carroll was part of his plans for the new season he stopped well short of saying he was: “I think initially it’s about assessing the group and the squad and the strengths, you never know entirely until you come in and obviously the pre-season this season is a little broken because of players away with the Championships and recovering, but certainly come the beginning of the season I hope to have the squad to take through, because obviously after August that’s you then, through until January.

“It’ll just be a piece of piecing it together through until then and building a squad that hopefully can compete.”

With no ‘hands off’ forthcoming and Rodgers seemingly reluctant to issue one the story became one of the main ones of the week and will probably stay that way until the player’s future is resolved. But why single Carroll out? 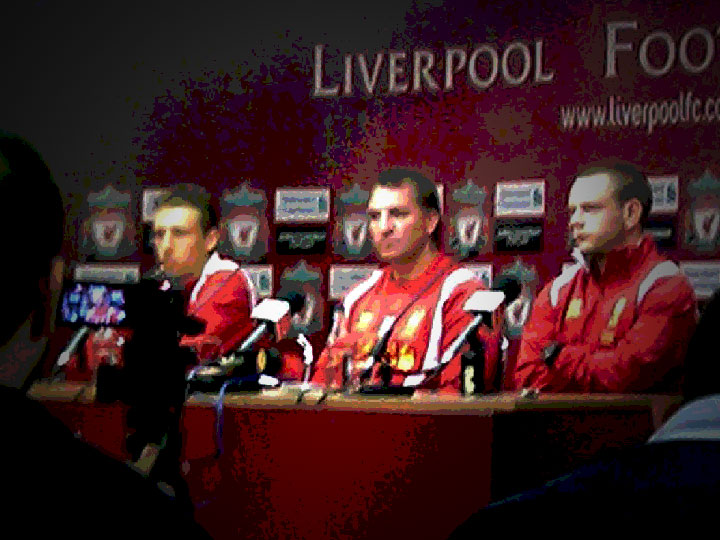 Rodgers has made it clear a number of times that that two attributes are required by him from the players in his squad. They have to be right technically and they have to be right mentally. If the most skilful passer of the ball in recent history was offered to Rodgers he’d need to meet him first to make sure he had the attitude the manager feels is needed for players at a club like Liverpool.

This is encouraging for the younger players – he’s told them if they’re good enough they’re old enough – but he’s made it clear that being good enough doesn’t just apply to their abilities with the ball. Some of the current crop of up and coming youngsters will turn out not to meet Rodgers’ requirements technically and might not get as far as an opportunity to show Rodgers they meet his requirements on attitude. But for older players, on the whole, their technical abilities seem to have been accepted by Rodgers and so they are now getting their chance to show him what they are all about.

Although Rodgers doesn’t have a great deal of input into the day-to-day running of the official website it’s perhaps telling that Joe Cole has been selected as one of two players to do a video diary of the US tour. The other, Jonjo Shelvey, signed a new long-term contract last week. Maybe Cole, who Rodgers has worked with in the past, is going to get a genuine shot at proving himself on this tour, something that seemed unlikely up until very recently. Cole’s biggest problem may prove to be fitness, but if he overcomes those problems it will demonstrate the kind of determination Rodgers wants from his squad.

Alberto Aquilani is another player who looks set for a chance to prove himself. He’s been included in the 34-strong touring party and although few would question his technical abilities has he got the stomach to fight for a place in Rodgers’ league and European squads? Rodgers seems to be asking himself the same question, saying last week: “I had a good chat with Alberto the other day, he’s a good guy. It obviously hasn’t worked out for him here yet but he’s a player with the qualities, in terms of technical and tactical ability, to play.”

“What’s going to be important,” Rodgers went on, “is that the players have the steel and the mindset to play – that’s something I’ll find out from all the players during pre-season.”

For many the biggest obstacle to Aquilani’s Liverpool career is that the Reds don’t play in the Italian league. The issue isn’t just about the different styles of football – if that’s an issue at all – but more about whether or not the player can settle in the UK. Having arrived in England with an injury he went on to miss more matches through reportedly minor setbacks, stomach bugs for example, and there were question marks about his mindset. Exactly the kind of questions Brendan Rodgers is going to ask.

And that is fair enough. He’s inherited a squad of players with mixed technical abilities and of course mixed mindsets. He can find out about a player’s technical abilities from scouts, DVDs and his own knowledge of the players either at close quarters or as picked up from the sidelines or stands during one of his previous coaching roles. Getting them in for training will help him confirm his initial assessment and to find out which players are capable of fitting into his plans and which ones won’t ever fit into them. He also needs to know which players are worth sacrificing if there’s a chance of upping his transfer budget at the same time.

In terms of mindset he’s going to be his own judge of that, it would be a surprise to find him relying on hearsay from others about how mentally ready for battle those players are. So Aquilani gets a chance, Joe Cole gets a chance, the youngsters stepping up from the Academy get a chance. But, it seems, Andy Carroll doesn’t get a chance. But Carroll, it seems, hasn’t passed the first test for Rodgers, the one where his technical abilities fit what Rodgers wants from his player.

Carroll is in the squad of 34 but clearly won’t quite feel a part of that squad when he joins up with it after his holiday in Brazil. Rodgers has spoken to Carroll on his holidays, as he said, “So he knows exactly where he stands,” but has it done Liverpool any good to make it so public that the player is so unwanted?

When asked about a possible loan deal Rodgers said: “It’s something I would have to look at if I have to be honest. There are many things to going on loan, is it going to be beneficial for the club, that’s the most important thing? Sometimes a player going out on loan – in general, not just Andy,” he added, “can benefit the club in the long term. It gets them game experience and they come back a better player, a more confident one, certainly more so than if they’ve been sitting on the bench for the majority of the season.”

One of the sides linked with a loan move was Sam Allardyce’s West Ham, arguably the worst side he could move to in the top flight if he’s going to get experience that’s of use to him in his Liverpool career.

But it’s believed that Liverpool are looking for a permanent transfer, not a loan, with loan bids from Newcastle United reportedly turned down already. Liverpool are asking for £20m and a straight sale. “I’m not going to sit here and say I will never let anyone go on loan,” Rodgers said last week, “then come in here in two weeks and a player’s gone, and you’re saying ‘you said you wouldn’t let them go’.”

Although Rodgers did, eventually, play down the idea that he’d already made his mind up on Carroll it seemed to be little more than trying to, belatedly, say the right thing: “He’s no different to any player we have here, they might have all the attributes but not the mentality to play, it’s a wee bit unfair for Andy to get labelled any other way.

“He’s a good kid, a good lad, so we will just see how the formation of the group shapes up over the next four or five weeks. Andy’s a player I want to assess and speak with. We’ve already had a good chat on where we’re at. My task is to build a group that can challenge. Hopefully when the bus leaves at the end of pre-season, it will have the people on it who I want.”

Carroll was bought at a price far higher than should have been paid for him – that’s not his fault – but the handling of the attempts to, seemingly, offload him might see him sold for a price far lower than might have been got for him.

None of this is helped by the club continuing to talk of a ‘transfer committee’ that will essentially be the club’s director of football without actually announcing the names on that committee let alone the start dates. Unless the names are out of this world perhaps the club should look at finding someone who can start sooner.

Rodgers will still expect to get the final say in who goes or stays, albeit after negotiating with that committee, and knows what kinds of players he wants. As for Carroll: “Like every player,” Rodgers said, “there are certain styles and systems (clubs) will be playing in which will allow them to flourish.”

Wherever that is, it seems unlikely to be Liverpool. And if that turns out to be true, it’ll show just how bold Brendan Rodgers is prepared to be to see his plans for the Reds to come to fruition.