Would it hurt LFC to consult all Hillsborough families? #LFCKIT

AT midnight last night the deal that saw Adidas as official kit supplier to Liverpool FC came to an end as the new contract with Warrior Sports kicked-in. After much build-up and expectation the new home shirt for the 2012-13 season was revealed by the club.

The contract is lucrative for the club – and includes for the first time an agreement to produce a new home kit every season rather than every other season – and although many fans would buy the new shirt regardless of how it looked it’s of course important to make sure it will appeal to as many supporters as possible.

Liverpool’s badge – or logo if you prefer – was changed some years back to incorporate not only the Liverbird but also the Shankly Gates and more significantly the eternal flame in memory of the 96 supporters who died as a result of the 1989 Hillsborough disaster. The new shirts have gone back to a variation on the previous badge – the Liverbird with the lettering “L.F.C.” underneath and no eternal flame.

Instead of having the flames on the front of the shirt in the club’s crest they are now on the back of the shirt, two flames either side of the number “96”.

Some of the families are represented by The Hillsborough Family Support Group (HFSG), the group set up first in the aftermath of the disaster. Others are represented by The Hillsborough Justice Campaign (HJC), a group set up later by some families who felt a different approach was needed in terms of the fight for justice for the victims – and survivors – of that day in 1989. Some time after this another group was set up, Hope For Hillsborough, by Anne Williams, the mother of Kevin Williams. As well as these three groups there are some individual family members who have chosen, for their own reasons, not to be a part of any of the groups. 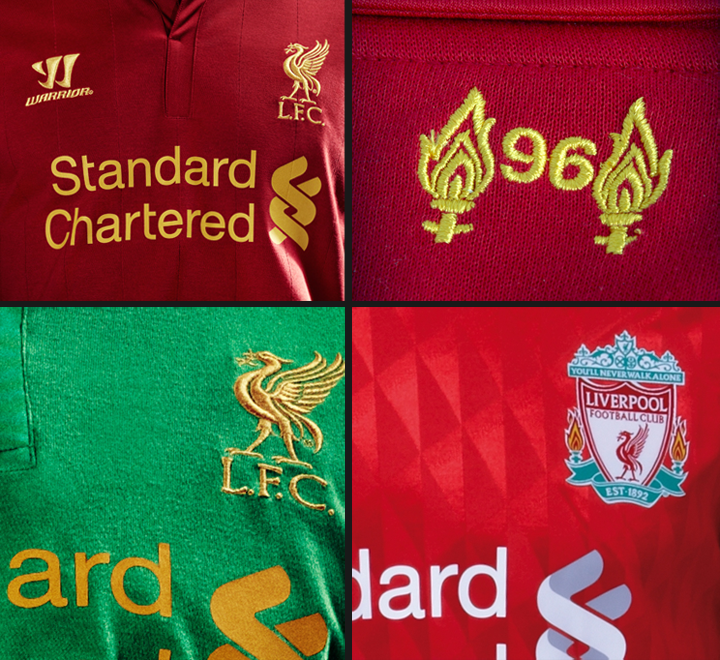 When there was only one group the club had one point of contact when it needed to discuss any issues that might be of concern or importance to the families. However it was perhaps inevitable that with such a large number of bereaved families there would come a time when some of those families would see things differently to others, that divisions could start to form and that sooner or later a split would take place.

To those of us who aren’t bereaved family members or survivors of the disaster it should not matter a great deal why those splits took place. There is always more than one side to a story and given the unthinkable grief and anguish those people have been through it isn’t our place to judge their actions. If the authorities had seen fit to meet their responsibilities instead of continually trying to cover up the failings of others we would never have been in a position where that fight for the truth was still going on a year after the disaster, let alone almost a quarter of a century later.

Each of those family members is an individual, as is each survivor. They have their own feelings and opinions and deserve equal respect for what they have been through. That said, it would be difficult for the club to maintain close contact with every individual family member. There were 96 who died. Children with a mum and dad as well as brothers or sisters. Older victims who had a spouse and children of their own as well as their own parents and siblings. A lot of individuals had their lives shattered by that disaster.

But the club doesn’t need to contact every one of those individual family members. It just needs to contact the three groups that represent the vast majority of them.

Would it be difficult?

Rumours of the change to the badge were floating around the internet for some time, as rumours about new kits usually do. The first official hint at this rumour being true came in the minutes of the Supporters’ Committee meeting in March. The club clearly understood the importance of contacting the families about the change, yet chose to contact only one of the three groups.

By letting the three points of contact know about it, they can be told about it sensitively.

Had those minutes not been issued, had that question not been raised, some of those family members wouldn’t have even known the flame had gone until today when they saw the pictures of the new kit.

Would it hurt the club to keep all three groups in the loop?

The club don’t need to take sides – none of us do. It isn’t taking sides to speak to all three groups about matters of this nature. But by essentially ignoring some of the groups it shows a lack of respect to the individual bereaved family members belonging to those groups.

If the new stadium ever becomes a reality, or if the difficulties of redeveloping Anfield are ever overcome, a decision needs to be made on what to do about the eternal flame on Anfield Road. Will the club ignore the other families when it comes to making that decision too?

The HJC issued a statement expressing their thoughts on how the change to the badge was communicated:

The HJC are aware of an amendment to the new 2012/13 kit, which has recently been launched. We have also noted that the Hillsborough flames and “96” will now appear on the back of the shirt, “after consultation” with “family members”.

We can confirm that no bereaved families of the HJC were contacted or consulted. Indeed the first we were aware of this was via the Supporters Committee Minutes of their March meeting.

Once again LFC has chosen to ignore the HJC and their families. The continued refusal of the club to acknowledge the HJC is insensitive, divisive and deplorable. 96 is more than a number. LFC would do well to remember that.

Some individuals at the club do go out of their way to keep all the groups in the loop and to help publicise campaigns and events relating to those groups. It’s a massive shame that this doesn’t seem to reflect overall club policy, for reasons never satisfactorily explained.

And as the HJC clarified, via social networks, their issue isn’t with the decision to use a different badge or to move the flames to the back of the shirt: “To clarify: HJC’s issue is not with the design of the shirt. Our concerns are with the fact that, despite LFC stating that families were consulted during the design process, no families within the HJC were ever contacted.”

By contacting all the groups this feeling some families have of being excluded would be lessened if not removed. It would hurt Liverpool far less to include all the groups than it hurts the individuals who feel ignored.