THE FA announced on Friday evening there was still no decision on the Suarez-Evra case, that it would be tomorrow at the earliest before the outcome would be made public and that Liverpool would have to go into a tenth competitive game with the allegations hanging over them and still no resolution.

The last bit wasn’t actually mentioned in the FA’s statement but since Patrice Evra made his allegations on October 15th the Reds have played eight league games and two Carling Cup games with Luis Suarez under the spotlight that comes from being publicly accused of something as abhorrent as racism.

The FA and the two clubs haven’t said anything in detail, at least on the record, about exactly what Patrice Evra accused Luis Suarez of saying. The FA’s charge was full of ‘and/or’s, suggesting they’re prepared to fall back on doing him for abuse if they can’t prove the racist abuse charges.

When Evra went to French TV to make his allegations public (it still isn’t clear whether he did this before or after telling the referee and his manager) he didn’t go as far as saying what the actual word was that had offended him – or in what context it had been uttered. Suarez was, inevitably, asked what had gone on when he was back home for the recent international break and although he said the word in question was one Evra’s own team mates call him he also didn’t go into details about what it actually was.

The FA reportedly asked the two clubs not to discuss the case but such requests hardly fit well with the model they helped set up for top-level football in this country. The Premier League is what it is because of the money it brings in from media coverage and in particular the TV coverage. This means managers are contractually obliged to speak to the media at certain times before and after games (even if one manager ignores those obligations, without fear of punishment, as and when it suits) and so the managers will face questions about the big talking points involving their clubs.

This case is certainly a big talking point so both managers have been asked about it. Neither has responded with any details, but the idea they’ll be able to go through a press conference or post match interview without touching on it in some way is ludicrous. Of course it has had little effect on Patrice Evra or Manchester United, it’s Luis Suarez and Liverpool who are playing under a cloud awaiting a decision and so it’s Kenny Dalglish who’s asked about it the most often. 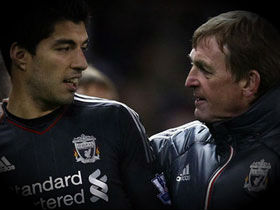 Dalglish has, on the whole, repeated support for the player and criticised the time it has taken to reach various stages, pointing out at one stage that it had been over three weeks before Liverpool or Suarez were asked for their side of the story. At the end of October he said the case seemed to “dragging its feet” and said: “We’d rather have it done and dusted, out in the open and whoever’s the guilty party – the person who said it or the accuser – get their due punishment.”

As time has gone on it seems less likely there will be such a cut and dry decision. The possibility of a misunderstanding was raised in November when the Guardian reported: “Top-level sources at Old Trafford say the offending word was uttered in Spanish and allegedly was a derivative of ‘negro’.”  The Guardian also reported that “[Evra] and United have subsequently been informed that the case does not merely rest on what Suárez said but also, crucially, the context in which his words were used.”

A number of broadsheets went with a similar story the same day, without citing those “top-level sources”, but the impression the Guardian’s report gave was that the information came from somewhere in the Manchester United camp, perhaps with elements of it from multiple sources, including connections to the player. But it does quite clearly and specifically refer to “top-level sources at Old Trafford”.

A few days after these claims were published Alex Ferguson decided to pretend they hadn’t. The author of the story in The Guardian is one of those allegedly banned from Ferguson’s press conferences so maybe Ferguson doesn’t read his work and missed that version of the story. Maybe he read it and didn’t notice the “top-level sources at Old Trafford” bit.  Maybe he just chose to play ignorant.

Acting like a man who knows he’ll never be challenged in a press conference, Ferguson said: “We’ve been asked by the FA not to say anything about the Evra situation and we’ve abided by that.” No mention of “top-level sources at Old Trafford” speaking to the media on the quiet about the case, instead it was: “I think Liverpool have been drip-feeding a lot of stuff out in the last couple of weeks, but, at the end of the day, the FA will deal with that.” 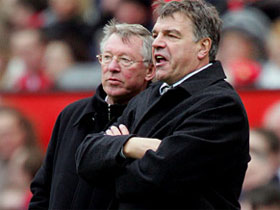 "He's a foreigner, he doesn't understand..."

With a case as serious this there is no place for petty point-scoring but Alex Ferguson seemed intent on doing just that. He’s done it throughout his time as Manchester United’s manager and knows he’ll be able to do it without worrying about the consequences to him or his team. It’s a tactic he’s made extensive use of down the years and often to great effect. He’ll condemn a rival manager as “beyond the pale” for celebrating his own team’s goal in a game he had nothing to do with as easily as he’ll turn the blame onto his rivals for “drip feeding” information from an investigation of racism.

There seems to be little difference in his motives for either.

“I understand that they want to protect their player, he’s an asset, you can understand that, but we’re just abiding by the FA,” he claimed, laughably.

Two months after the incident took place and only after the hearing itself had started came an article from Henry Winter that added new details to all those previous reports. By this stage the hearing had already begun and so the article was highly unlikely to make a difference to the proceedings, but if the information supplied was accurate it shows why this wasn’t as straightforward a case as some assumed.

Winter wrote: “Referee Andre Marriner called the pair together for a lecture. Suárez apologised and attempted to pat the United full-back on the head. ‘Don’t touch me, you South American,’ Evra is alleged to have said. To which, the Uruguayan replied: ‘Porque, Negro?’”

What wasn’t made clear in that article is whether the words from Evra were also in Spanish. If they were in Spanish, did he use “sudamericano” or a shortened version often used in Spain, “sudaca”?

“Sudaca” means “South American” but isn’t usually directed in a nice way. It’s usually aimed at South American immigrants; it doesn’t take a great deal of imagination to see how offensive it can be. It’s more difficult to imagine Evra actually saying, in English, “you South American,” as part of his order to Suarez not to touch him. 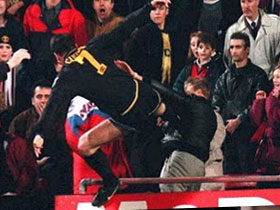 Sympathy: Reaction was to being called a French (expletive).

Winter’s article also referred to another alleged comment from Evra, one he made to Marriner after being booked for a foul on Dirk Kuyt. He wrote: “Evra responded to Marriner’s caution by allegedly claiming: ‘You’re only booking me because I’m black.’”

If this is true it calls into question the FA’s approach to the case from the outset. If it is true, why wasn’t Evra charged for it?

As with the stuff in the papers about what Suarez said, we don’t actually know how true it is, whether something has been missed out, whether the context is being overlooked or whether it’s coming from sources with more interest in one side of this case than the other.

We know that the story has been milked by some with more interest in petty point-scoring than in seeing racism stamped out. 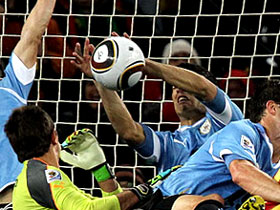 We’ve seen people pretending to care about racism at the same time as laughing dismissively at any suggestion that cultural differences of the accused might have some relevance, failing to see the problem in that particular approach. We’ve seen broadsheet writers gleefully take one of Fergie’s pitchforks and write in a way that suggested an overturned red card (for what was still a foul) and a handball on the goal line added weight to those accusations of racism. We’ve even seen comments from a compatriot of the man in the firing line taken as though it was the man himself who’d said them – after all, they’re from the same country.

Meanwhile, in a hotel somewhere off the M6, the panel have seen all the evidence and spoken to any relevant witnesses. They’ve had the chance to ask questions and the chance to check facts. Now they’ve got a decision make and they must get that decision right. They’re better equipped than anyone else to do that.

When they’ve made it, will football be any better off for it? Will the outcome of the case lead to an end to discrimination of any kind in the game?

That, as with the outcome of this case, remains to be seen.