KENNY DALGLISH’S side came away from Villa Park with a 2-0 win that didn’t do their performance justice but ensured they started the hectic festive fortnight with three points and ended the day three points from the Champions League places.

For most managers that would probably be enough incentive to throw the club record signing into the fray but Kenny doesn’t look at transfer fees when he’s picking his side any more than he considers reputations or thinks about headlines. He just looks at what’s best for the club, his whole football philosophy revolves around that principle – even if it does mean he’s on the end of abuse from time to time.

It’s his willingness to think in that way that has been key to the progress the club have made this season. Liverpool have drawn more games than they would have preferred this season but with just one defeat since mid-September and points taken off all but one of the other top six sides the Reds are genuinely moving forward purposefully from the depths they’d sunk to a year ago.

So Andy Carroll was on the bench again, as were Jamie Carragher, Dirk Kuyt and Maxi Rodriguez. It’s going to be a long time, if ever, before Liverpool get another manager with anything approaching the status Dalglish has with the fans. When Kenny chooses to leave £35m of striker on the bench there is some criticism – but it’s hardly deafening. And perhaps most importantly of all, when he chooses to leave someone like Jamie Carragher on the bench there isn’t even a whisper of discontent.

When the time does come for the club to get its next manager it can only be hoped that memories remain strong as to the benefits of affording the boss some respect, of letting him get on with his job. Liverpool’s back four has looked more solid, whilst carrying more of an attacking threat, than it has done in some time. That’s not a criticism of Jamie Carragher, who’s lost his status of automatic starter, but a compliment to the players who have made it easier for Kenny to go with his instincts and pick them.

It’s the quality of the back-four’s play that has allowed the focus for criticism to be on those missed chances and even at half-time today the 2-0 scoreline wasn’t a reflection on the Liverpool performance.

Delfouneso was brought down by Charlie Adam within a couple of minutes of kick off but the free-kick came to nothing. There was a little scare for the Reds in the eighth minute when Albrighton fired in what looked a perfect cross for a Villa centre-forward – but that centre-forward was Emile Heskey and as well as firing it straight at Pepe Reina he was offside. Liverpool were getting forward with more purpose than Villa though and Stewart Downing had a chance in front of goal, ultimately hitting a soft daisy cutter straight at the Villa keeper. 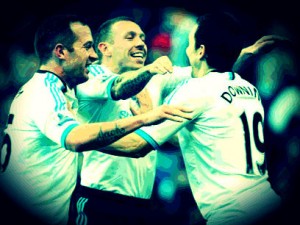 It wasn’t long before Liverpool did open the scoring and it was Downing who played a key part in it. He won the corner that he sent into the box towards Shelvey, who flicked it towards goal. Suarez tried some trickery of his own to divert it into the net and although Villa’s keeper blocked it Craig Bellamy was on hand to knock it in the back of the net in a more conventional way. Downing – who was booed throughout the game by Villa’s educated and sophisticated support – was the first player Bellamy ran to as he and his team-mates celebrated the goal.

Liverpool kept the pressure on and a couple of minutes later N’Zogbia was booked for Villa after his last-ditch attempt to stop Glen Johnson tearing down the wing ended with Johnson on the turf and the ball nowhere near N’Zogbia’s foot.

The free-kick came to nothing but the Reds kept possession and were rewarded with the second goal very soon after. Adam found Suarez, who found Bellamy, who won Liverpool another corner, this time on Villa’s left.

Bellamy took it himself and it was a lesson to corner takers everywhere, perfectly flighted for Skrtel to head into the back of the net. No doubt there’ll be blame levelled at Villa defenders but sometimes the emphasis should be on praising both the delivery and the taking of the chance.

Villa were struggling to create chances of their own, restricted to shooting from outside the area most of the time. N’Zogbia had a shot from just outside the area that had Pepe Reina scrambling to his right, just in case, but went high and wide. He was a little close with another shot that went into the side-netting, but Reina would have no problem reaching it had it been on target. A weak shot from Petrov will be marked down as a shot on target but wasn’t a great threat. An Emile Heskey header, from a corner, went so high over the net that it was destined to be the subject of quips about Father Christmas and his sleigh. As long as Villa were restricted to this type of chance there was little for the Reds to worry about.

A familiar phrase from Liverpool matches of the past – “Emile Heskey goes to ground” – was heard again and led to Liverpool’s first booking, Charlie Adam the recipient. A few minutes later and Adam was joined by Bellamy and the referee’s book looked more of a threat to the Reds than Aston Villa. As it was the cards stayed in Peter Walton’s pocket after that, but having not been booked all season Bellamy has now had three bookings in his last three games.

Luis Suarez put a ball through to Shelvey in the penalty area before half-time and the youngster got enough contact on it, at full stretch, to force a save from the keeper and another corner for Liverpool. That came to nothing but the Reds carried on from where they’d left off in the second half, creating chances, with Daniel Agger on the end of one just 45 seconds after the restart. That he was in the Villa box in open play at that stage of the game said a lot about Liverpool’s confidence, sadly the delivery was just a little behind him and that chance was lost.

Four minutes into the half and Petrov was forced to lunge at Bellamy to break up another Liverpool attack. Only Peter Walton knows why it wasn’t a yellow card.

One name conspicuous by its absence in the first half was “the woodwork”, but it was warmed up now and ready to foil The Reds again. Twice.

It was Suarez the victim on both occasions, the first one coming after he’d done something he does far more often than his smear-loving critics notice or acknowledge. The man so often labelled a diver fought to keep his balance in the box, under pressure from a defender, before setting himself up for a shot that looked like it was going into the roof of the net. As it was it hit the underside of the bar before bouncing back just the wrong side of the line.

A more gentle chip from the Uruguayan forward looked to be going in – but instead of hitting the net it hit the post and bounced out to a Liverpool player who was offside.

What happened to shots going in off the woodwork?

Johnson had a shot that forced the keeper to scramble and fling it round his post. Suarez missed a chance to put it on a plate for Shelvey, instead trying find space for his own shot before laying it to Downing who shot well over. By the time the hour mark was up Liverpool had seen also seen shots from Shelvey and Adam deflected wide as Guzan’s goal was under fire.

Shelvey had a clear chance from outside the box 25 minutes from the end but overhit his shot and the Villa  fans were grateful to see the ball head like a flyaway into safety.

The fact Shelvey was on the pitch was another pointer to the attitude Kenny has towards picking his team. It would have been easier to pick Maxi or Kuyt, or to find room for Carroll, but the boss went with Shelvey and his decision was vindicated.

Henderson found himself in a more defensive role than he’s played for Liverpool before and the fact he was hardly noticed suggests he didn’t do a bad job.  Downing played on the right and his critics will no doubt point to that shot over the bar and the one straight to the keeper, forgetting the part he played in the Liverpool opener that set this victory up. With Lucas out for the rest of the season there’ll be more examples of players being used in different positions to what might be expected – but Kenny was never one for sticking to what was expected.

This was Liverpool’s tenth competitive match since Patrice Evra made his allegations about Luis Saurez. The striker still awaits the outcome of the case against him and as what has been a hectic year for him nears an end he maybe didn’t look quite as disappointed as he normally might when he was subbed on 73 minutes. In his place came Andy Carroll, the change adding weight to the theory that whatever their individual abilities are the two don’t make an effective partnership.

Jamie Carragher was ushered from the bench for the last seven minutes but it was in place of Jonjo Shelvey and not one of the back four. He’ll be glad his most memorable part in the game turned out to be insignificant; deep in stoppage time Villa wasted a chance after he’d given the ball away to Delfouneso and got nutmegged in the penalty area.

It was the only point in 90 minutes where any sense of panic was visible from Liverpool, who proved today that they have the strength in depth as well as the team spirit that they need if they are to have a real crack at that target of a top four finish.