In tribute to some little heroes

HE’D JUST set up the winning goal and was standing with the goalscorer, in front of the Sky reporter, ready to hand him the man of the match champagne – but Charlie Adam had one thing he really wanted to say.

“I’d like to dedicate the win to Brad Jones who had a difficult week losing his son. That one was for you big man and we are all thinking about you.” 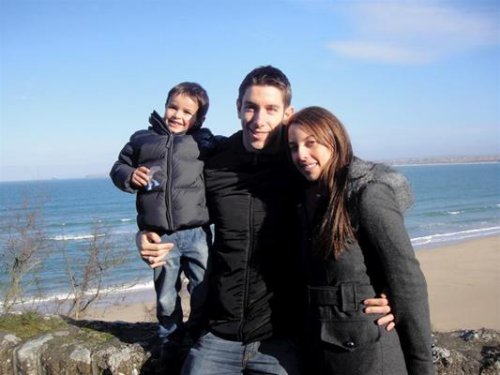 One of Liverpool and Australia’s goalkeepers, Brad joined Liverpool shortly after learning his son Luca had been diagnosed with leukaemia. That news came to him whilst out in South Africa with the Socceroo’s World Cup squad and was the kind of news any and every parent dreads to hear. Luca was just four years old. He underwent treatment and kept fighting, fighting for over two years in the end, but that fight sadly ended last week.

Those extra two years of life came thanks in a large part to stem cell transplants that Luca received, a type of transplant that can only come from donors, donors that have to be a match for the patient. Brad and his partner Dani have campaigned tirelessly throughout the time since Luca first fell ill to help publicise the desperate need to get people on the register and in turn increase the likelihood of other sufferers getting a match.

In the UK the register is run by an organisation called Anthony Nolan and they campaign for money (to help fund the work they do) but more importantly for donors.

It’s not always easy to find money but it isn’t too difficult to get yourself on the register. Anthony Nolan will send a special container (they call it a ‘spit kit’) which you spit into. You send this back and they can add you to their register of donors of bone marrow and blood stem-cells. It’s as easy as that.

Anthony Nolan saves the lives of people with blood cancer, people who need a bone marrow or stem cell transplant. The charity began in 1974 when Anthony Nolan’s mother set up the world’s first bone marrow register. By matching willing donors with those who desperately need one of these transplants Anthony Nolan help two people every day. Money donated to the charity is used to maintain the register, to help in the bid to recruit more donors and also to help fund research into ways of helping future sufferers of this awful illness. 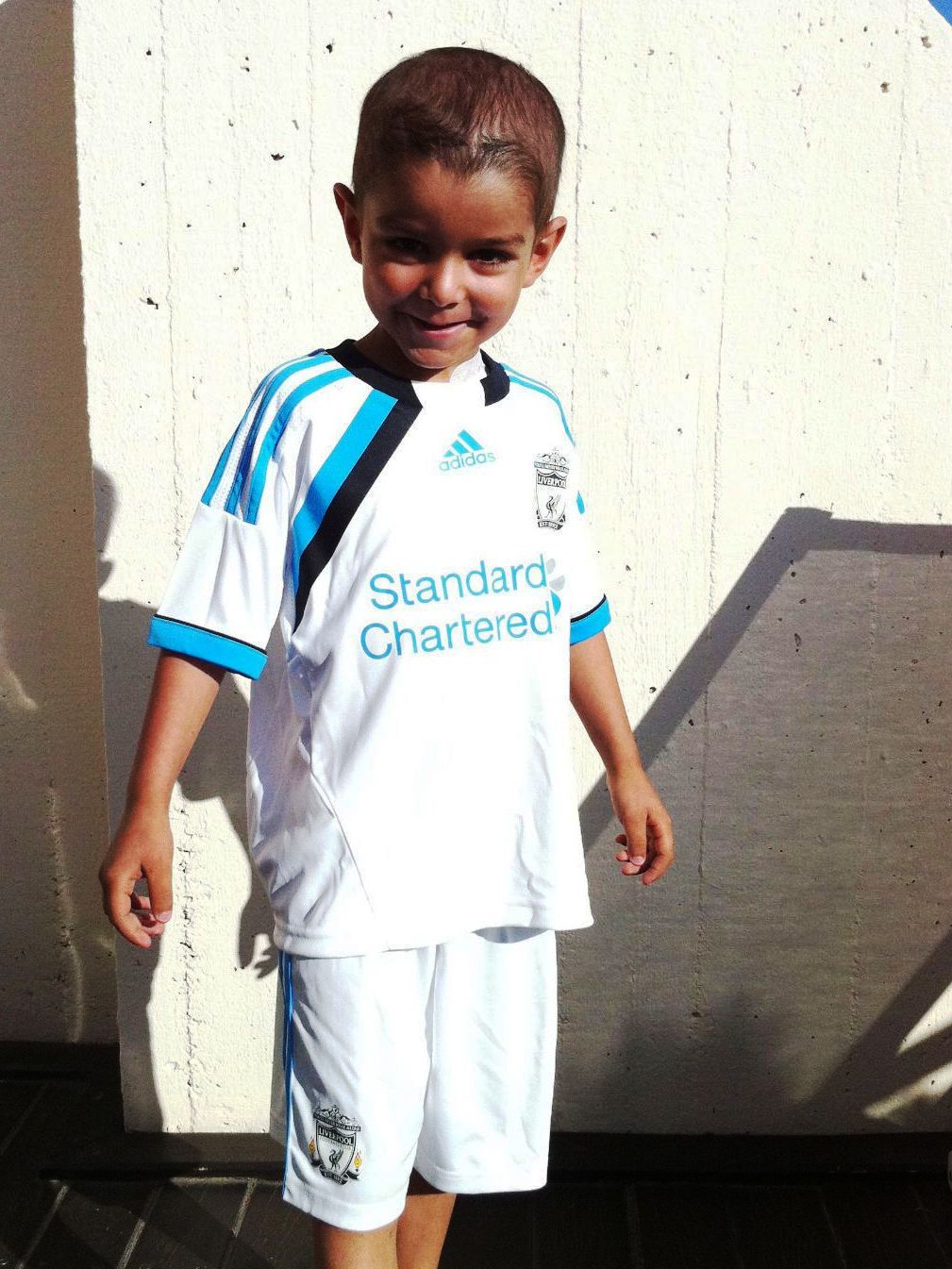 Luca in his Liverpool kit

Luca’s treatment was painful; chemotherapy and then a stem cell transplant, with more chemotherapy and further bouts of illness to follow, but he was only able to try and fight that battle because of the kindness of those who have joined the register. Liverpool’s players and staff wore black armbands on Sunday, as did those from his former club, Middlesbrough, the day before, in tribute to Luca and in support of Brad, Dani and all of Luca’s family. It was a touching tribute, as were Charlie Adam’s words straight after that game, but perhaps the most fitting tribute anyone can make to Luca is to make the effort to get on this register. It could save someone’s life, a child’s life.

It’s not hard to get on the register but there has been a shortage of people willing to get their names on it, and no doubt the reasons for this vary. According to Anthony Nolan,  43% of 18-25 year-olds said they were reluctant to register because they thought donating would be painful.

Yet, as Anthony Nolan point out: “In fact, more than 80% of donors today do so via a process where stem cells are taken from the blood stream.” They quoted 25-year-old Callum MacDonald-Wood, a donor from Leeds, who said: “Donating was a bit like giving blood. I was hooked up to a machine that took the blood out from my arm and filtered it, then the blood went back into my body via my other arm. It took about four hours, but there was no pain. I could have saved someone’s life.”

If you are chosen as a donor you won’t be doing this every week – you might not even do it twice – but you’ll be doing it in the knowledge that you’ll be saving someone’s life when you do. The people Anthony Nolan needs most is men aged between 18 and 30. At the moment only 12% of the donors on the register are. 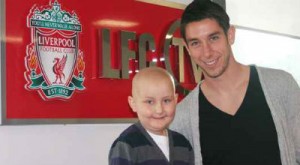 Elliot Wild with Brad Jones at the LFCtv studios

One little boy who wasn’t fortunate enough to receive a transplant touched the hearts of Liverpool supporters across the world earlier this year. The need for more people to get on the register couldn’t have been made any more obvious than when a match couldn’t be found in time for nine-year-old Elliot Wild to receive a stem-cell transplant. He made an appeal on Liverpool’s TV channel and captured a lot of hearts when he interviewed Pepe Reina for the channel.

Elliot and his family set up a recruitment drive, with a lot of help from Brad and Dani, which helped encourage over a thousand people to join the register. Those efforts were amazing but sadly a donor for Elliot wasn’t found in time and he lost his own fight in March. Brad and Dani were close to Elliot and his family and Elliot’s mum, Jackie, told the Echo of her sadness at Luca’s passing: “I have spoken to Dani, it is so awful. Life is cruel. They were a great support to us and our efforts to get a donor.”

On the same day as Luca lost his battle Elliot’s story was shown on national TV as part of the BBC’s Children In Need programme and he touched yet more hearts, with Elliot’s family invited down to the studios.

Elliot’s story was told to help raise awareness of the needs of Claire House, a place that is vitally important yet desperately short of funding for its work. Claire House is a 10 bedded hospice for children and young people with life limiting, life threatening conditions from across Merseyside, Cheshire, North Wales and the Isle of Man.

The impact was huge, said Jackie: “We went to the night in London and while we were in the green room we were told they had received a record amount of calls for one film – about 40,000 in the space of five minutes.” During the Children in Need programme it was mentioned that Claire House are unable to open two of their beds due to a lack of funding. Anything you can do to help will be received with heartfelt gratitude. 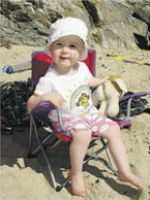 For more of an idea of what Claire House do see the page set up by Dave O’Brien who lost his daughter Libby in 2008. Libby had been diagnosed with Ewing’s Sarcoma cancer aged just 16 months in April 2008. After much therapy and numerous surgical interventions the family were given the heartbreaking news that the cancer couldn’t be cured. “Having spent a family respite weekend at Claire House in May 2009 we decided that we wanted to be at Claire House for Libby’s end of life care,” said Dave.

“The care shown to Libby during her last 8 days was nothing short of excellent. But much more than that was the care shown to us all as a family during what was an extremely distressing time. The most important aspect of this time was that Libby’s medical needs were completely taken care, this allowed my wife Pip, son Ben and I the unforgettable opportunity to be nothing more than her Mummy, Brother and Daddy.” Libby died on the 15th of August 2009 aged 2 years, 8 months and 8 days.

Dave has come up with the novel idea of going without alcohol for a year to help raise awareness and funds for the hospice. You can donate through the page he has set up as he comes to the end of that year: uk.virginmoneygiving.com/daveobrien. Please also take some time to watch the video he made as a tribute to Libby’s short life.

There is much heartfelt gratitude to those who join the Anthony Nolan register. You could save a life, so please find the time to order a ‘spit kit’ and get yourself on the register.  Go here to get started: “Anthony Nolan – What you can do – save a life“. 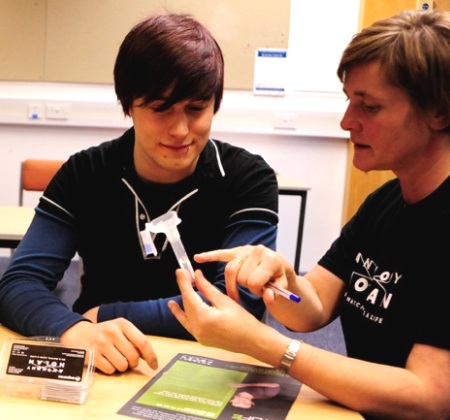 A potential donor being shown how to use the kit

If you do want to help Anthony Nolan financially one way to do it is through Dani’s JustGiving page at justgiving.com/Dani_Lawrence.

If you’re based outside the UK and want to become a donor you’ll be able to find details of similar registries in your own country through this link: www.bmdw.org.

In memory of Luca, Elliot and Libby.