Former Liverpool manager Rafael Benítez received the Silver Medal of the Royal Order of Sporting Merit at a ceremony in Madrid this morning. The presentation was made by Her Royal Highness Infanta Doña Cristina.

Rafa was given the news last month in a letter from Spain’s Minister for Sport and President of the Sports Council, Albert Soler Sicilia, in which he was told it was “in recognition of the achievements, circumstances and contribution by you in popular sport”. The letter went on to say that “such a deserved distinction is in recognition of his outstanding professional career which has served as a decisive national and international projection of Spanish sport.”

The presentation was made at the Faculty of Sport and Physical Activities of INEF (National Institute for Physical Education) which is where Rafa did his degree in the 1980s and where Benitez was awarded another medal in May 2010, the “Agustin de Betancourt”, the highest award given out by the Polytechnic University of Madrid (of which the Faculty is part).

On hearing of his award Rafa said he was “grateful, honoured and delighted” and “excited because I am going back to my home city and to INEF where I started my career and where I made so many good friends which I still have to this day.” 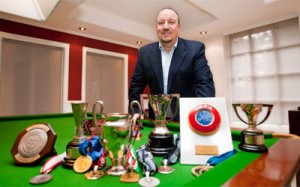 Rafa with some of his awards and medals – RafaBenitez.com

The honour from his homeland, while clearly received with much pride, seems unlikely to sway him and his family from their immediate plans, which revolve around staying in the UK and in particular in their Wirral home.

Last week saw the launch of the Montse Benítez Foundation, set up by Rafa and his wife Montse with the aim of helping local charities, in particular smaller charities that tend to receive no funding from government.

Rafa left Liverpool FC last summer after six years at the helm that saw him bring Liverpool their fifth European Cup and the FA Cup, as well as finishing runners-up in both the 2009 Premier League and the 2007 Champions League.  All of this was achieved in the midst of some of the bitterest in-fighting in Liverpool’s history, his reign ending after the banks had given the club five months to find new owners or face the consequences.

He spent the latter half of last year as manager of Inter Milan, winning the Italian Super Cup and the FIFA Club World Cup. He felt let down by broken promises from the Internazionale hierarchy about strengthening the successful but aging squad and publicly suggested that if they weren’t going to back him in the forthcoming January transfer window they might be better finding another coach. They chose the latter and Rafa and his family returned to England and the home they’d grown so fond of, not to mention the friends they’d made, during his time as Liverpool boss.

Rafa is understood to have received offers and expressions of interest from other clubs since leaving Italy, including Premier League clubs, but won’t be rushed into joining the wrong club. He wants a club that shares his ideas, a club that shares his ambition, a Premier League club, and as much as he wants to get back into management sooner rather than later he feels he can afford to wait until that opportunity arises.

Rafa spoke about his time since his return to England. The family had been homesick in Italy (for England) and with Benítez seemingly set on staying in this country it seems that he might be putting his family first, ahead of his career, something that isn’t often seen in football. “I’m not sure my wife will agree!” he said, putting on an impression of a wife tired of her husband watching the match all the time: “’You’re always watching games!'” It’s a voice familiar to many of us. 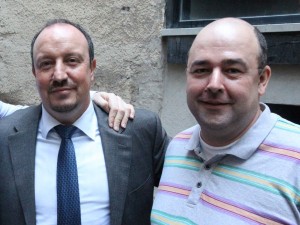 “At this time I am not managing a team so I can spend some time with the website, with the foundation and with the family. I try as much as possible to go with them, but always they want more and more! You can’t (give them that) but at least you try.”

How long Rafa will stay in England, how long he’ll be content with the work for the foundation and his website and spending time with his family, remains to be seen. But he certainly looks happy and very much in control of his own life.

Rafa also spoke about his attempts to get control of the Academy, attempts that he feels may have been somewhat misrepresented by the media:

“I think the fans know that when I was fighting some of the press said, ‘Oh, he’s fighting for the power.’