Carroll, Suarez and Kuyt to start for the Reds in the derby

A FRESH autumn morning will make way for some Indian summer sun in Liverpool today as the city makes the most of the unexpected heatwave. Not that heat would have been completely unexpected in L4 today – it’s derby day, the 185th time The Reds have met The Blues in the league and a time where friendships and family ties are tested to their limits.

Dirk Kuyt takes Jordan Henderson’s place in the starting line-up, the youngster is on the bench today alongside Steven Gerrard who continues his recovery from injury. Lucas and Adam start in the midfield.

Kenny Dalglish has gone with Suarez, Carroll and Downing from the off with Bellamy amongst the subs if needed. A back four of Kelly, Carragher, Skrtel and Enrique starts with Sebastian Coates on the bench.

Liverpool are way ahead of Everton in overall victories – 70 to 57 – but the gap is rarely very great on the day itself. Although we never see it there must be broken glass everywhere, given the number of times we’re told the form book goes out of the window for matches like this. It’s difficult to be impartial about this match and there’s little point in trying to be anyway. If Liverpool win today it won’t be because they were the better team on the day, it’ll be because of some controversy or other – or so the blues will be quick to tell us. Blues who fancy a go on Mastermind should pick derby controversies as their specialised subject because name a year and a Liverpool derby win and they’ll quickly tell you about the handball, the offside, the cheating, the yellow that should have been a red or how they’d have won it if it hadn’t been for…

It’s a big match for Liverpool fans, in particular Liverpool fans who share a house, office or social life with an Everton fan. But for Liverpool fans the derbies are still two of the 38 matches that have to be played in the quest to get something meaningful out of the league season. It’s one of the games that we look for first when the fixtures are out, one of the games that gives us most joy if we win – but it’s not our cup final. It’s not our be-all and end-all for the season. We won’t bring out a DVD of that match if we win it. Who would do that? At this point it’s tempting to say “smalltime club” or even “small club”, but the heatwave is warm enough as it is, it’s cruel to get that blue blood boiling that much on a day like this.

Liverpool aspire to be league champions and to add number six to the collection of European Cups, even if those aspirations are currently a little more long-term than they might usually be. Everton aspire to beat Liverpool in as many derbies as possible and to maybe share our new ground with us (if we ever build one). Their ultimate aim is to be better than us – if we become a mid-table club they’ll be happy to be 10th every season as long as we’re 11th. In the meantime they’re happy to score points against us – if not in the derby in the trivial and contradictory half-truths and myths they spout about why they think they are better than us.

This goal stands out in the words of their manager David Moyes: “On the pitch, we have not been that far apart in recent years,” he said. “But the amounts Liverpool have had to spend have been considerable. Maybe they haven’t spent as much as Manchester City or Chelsea but I bet it’s as much as anybody else. They can’t argue they’ve not had it.”

That was far from the case for the past couple of years. The previous owners had lost control of the club and it was being run by the man sent in by the banks. He put a stop to spending money received from transfers and oversaw the club’s sharpest decline in some time. The banks sent another man in and gave him six months to sell it, the belt was tightened yet further and a man unsuitable as manager came in and made things worse. If it hadn’t been for FSG maybe, just maybe, Liverpool would have gone bust and Everton would have got their heartfelt desire of being above Liverpool in the league. Moyes says: “I felt we were getting closer to Liverpool then. I thought we had a good team last year and the disappointment was that we didn’t do better, especially at the start. We were edging closer; this time last year at Liverpool people were talking about their banks wanting this and that but it changed very quickly for them.”

It wasn’t just about money of course, the lack of unity from top to bottom was causing most of the damage on the field. And if there’s one topic that Evertonians are united on it’s their desire to be better than Liverpool.

One of their favourite ways of claiming to be better than the Reds is to call themselves “The People’s Club”, a tag they tie in with their claims that most football supporters in the Liverpool area are Everton supporters. How they work this out is something known only to them, it certainly doesn’t seem to be true when wandering around town or driving through the suburbs – LFC stands out on cars, t-shirts and houses far more than EFC.

This is also tied into their obsession with Liverpool’s ‘out of town’ and ‘out of country’ supporters. They try to claim all their supporters are from Liverpool, from County Road, and scoff at Liverpool’s fanbase that stretches into just about every corner of the world. When Liverpool think about summer tours they have to work out which of a long list of countries to visit, knowing that they can’t visit every territory where they are hugely popular, and in turn knowing they’ll disappoint countless fans whichever area they choose to fly out to. If Everton think about summer tours they probably think about whether or not they can fit both Colwyn Bay and Rhyl in. 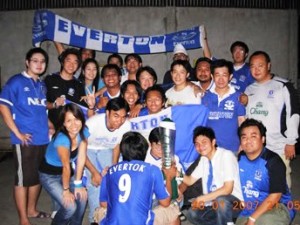 Everton even had a t-shirt for sale in their official club store mocking Liverpool for having supporters from Norway. As it happened Everton did have some supporters in Norway and those supporters weren’t very happy about the t-shirt, which Everton hastily removed from sale.

And who can forget Evertok?

Liverpool’s boardroom troubles have been well-documented and the efforts fans made to deal with those troubles are well-known around the world. The banners and the marches, alongside the singing of protest chants against the owners, brought awareness to the fight against the owners and kept the pressure on as they started to run out of options. All of which is not becoming of Everton, according to some of their fans.

When their own behind-the-scenes troubles came more and more out into the public eye they discussed ways of dealing with it, ways of stopping it from getting any worse. Some wanted to do what Liverpool fans had done so effectively, including making use of the exposure that the singing, the marches and the banners can bring. Some of their supporters dismissed the idea, angrily, referring to it as “Kopite Behaviour”.

Eventually some of them did make the effort to protest, no doubt with the “Kopite Behaviour” taunts ringing in their ears as they did so. Why they chose to bring a clown with a cake to their march is a story that deserves to be aired in its own right; suffice to say it’s a classic example of what we often mean when we say “you couldn’t make it up” when referring to the neighbours.

Not all of their fans are bitter or filled with jealousy about Liverpool’s success – but it seems to get harder all the time to find blues that don’t fit into that category. And that’s a big reason why the so-called “friendly derby” is no longer seen as being anything like that.

The atmosphere is far from friendly and it can and does influence referees and players into performing differently to any other league match. Today’s referee is Martin Atkinson, an official who is well into double figures for red cards in just over a year. He’s already sent five off in eight games so far this season and there’s a danger he’ll be the one getting the headlines tomorrow. Liverpool’s manager Kenny Dalglish said he didn’t know what Atkinson’s record for red cards was but it was up to the players to keep out of trouble anyway: “He refereed our game down at Arsenal and sent Frimpong off but I don’t think anyone could have any complaints about that, if you don’t behave yourself then you’re going to be sent off, everyone knows that.”

Kenny won’t be sending his players out to get themselves sent off but suggested it might be easier to get a red than it was when he was playing: “We’ve just got to compete as best as we possibly can without any intention of getting any red cards. I don’t know the stats but there didn’t used to be many sendings off – I think they sent the ball off a few times! I just think there’s more punishment now if you offend than what there used to be.”

Kenny resisted the efforts to make him say the game was more important than any other, either for the club or for the new signings: “I don’t think one game is going to dictate the future but it helps in that you get the bragging rights if you’ve been successful. It would be nice if a new guy scored a hat-trick. It certainly wouldn’t do them any harm, but you can’t judge someone on one or two games in the same way that if you make a mistake you can’t hang them.”

And he won’t hear talk of any crisis of confidence amongst his players: “Any game can act as a launch pad but there’s nothing wrong with the confidence of anybody.”

When the sides last met at Goodison Roy Hodgson was still manager and the takeover had just gone through. Liverpool fans expected an inspirational performance to celebrate the relief that had come from that takeover. Roy showed the new owners why so many supporters had started to call for his head and why Anfield attendances were dropping fast. It was an embarrassing game for Liverpool that Everton won 2-0.

Today’s game may well prove embarrassing for Liverpool, Everton fans may have the smiles on their faces on Monday morning, nothing can be taken for granted in a derby game, flying form-books or not. But it would be a surprise if Liverpool came out and played with anything like the attitude and complete lack of passion they displayed last season at Goodison. Sometimes passion can undo a team in a derby game, sometimes it can give a team the edge that brings in the points. Dalglish knows his team will need to strike the balance between passion and self-control and knows that if they do that they’ll bring the points back across the park to Anfield.

Moyes has been in charge of Everton for 18 league derbies and has won 3 and lost 10. The 3 wins were all at Goodison where Everton have lost just one of their last 14 games. Dalglish has won 11 and lost 3 of his 21 games as Liverpool manager in Merseyside derbies and is unbeaten in the last eight games he’s taken charge of against Everton (including his time as boss of Newcastle and Blackburn as well as The Reds).

But of course none of that matters. Kick-off is at 12.45pm, live on Sky in the UK and Ireland and ESPN in the US.