With yet another international break out of the way it was time for Liverpool manager Kenny Dalglish to speak to the media about a proper game of football, this Saturday’s visit to Stoke in the Premier League. Since Kenny last spoke at a pre-game press conference he’d signed some more players and so it was understandable that some of the questions would be about the new faces. 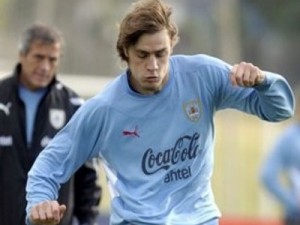 Perhaps some international breaks aren’t too bad – Sebastian Coates wasn’t bought purely on the strength of his Copa America performances but those games gave Liverpool more opportunities to confirm their feelings about the 20-year-old defender. Kenny said: “Sebastian came to prominence in the Copa America when he won it with Uruguay and was voted Young Player of the Tournament. And that’s not a bad accolade when you consider Sanchez went for £40million to Barcelona.

Although he’s available to play on Saturday Dalglish wasn’t giving anything away about whether he would be making his debut: “We’re happy to have him in. We just need to give him time to settle down and we look forward to it.”

Also new at the club, kind of, is Craig Bellamy. Bellamy played one season at Anfield under Rafa Benítez and having supported the club as a child was delighted to sign for a second time on deadline day: “He’s really enthusiastic at being back,” said Kenny, “and made a lot of sacrifices to return, financially and otherwise, because of what the club means to him. We’re delighted to have people with that attitude here.” 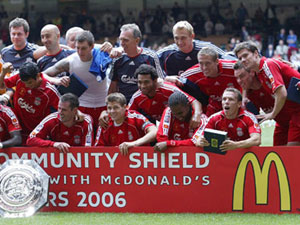 Kenny was asked if the signing was a last minute decision: “No, I don’t know why I’ve never signed him before in my managerial career,” he said, before adding: “Maybe I wasn’t working when he was available but he’s always been someone that’s impressed me.”

Why? “I think he’s got pace, he’s got quality, he loves this club – which is very important – and he’ll be a fantastic asset for us.”

The next question was no surprise – what about Bellamy’s temperament? “I don’t think it’ll be a problem; he’s given up golf!” joked Kenny.

“You wouldn’t want to take the personality away from any players and it’s amazing how people always focus on, maybe, a bad side of somebody isn’t it?

“They never really focus on the good sides – that doesn’t make a good story. So they just go on the bad bit and then they’ll bring everything else up. They’ll not talk about the fantastic goals, challenges, saves, whatever somebody would do. They just want to talk about the bad bit.

“So, fortunately, he’s come to a club that doesn’t want to do that. We want to concentrate on the good bits.”

Ignoring the point Kenny was making about concentrating on the good bits the next question was about Andy Carroll and the picture now being painted of him – in the usual quarters – as a hell-raising alcoholic on the road to self-destruction. Back in March the England boss, Fabio Capello, had a little go, in public, about Carroll’s drinking. With little else to talk about in the exciting world of the English national game the topic was brought back up in one of the England press-conferences and rather than bat the question away Capello chose to have another little dig: “Carroll is, er, not at top of the form,” said England’s Italian boss, still not on top of the form when it comes to speaking the language of his paymasters for the past few years, “because is important player for Liverpool, is important player for us, he didn’t play the last game with Liverpool, but his style of life is a problem if you no good, because he needed to be careful, because he’s important player, not only for England team also for Liverpool.

“I think he understand what he need to do, if he want to be a good player, a good sportive man, he need to drink less than the normal,” Capello added. 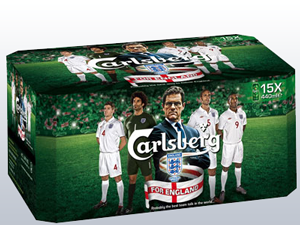 Carlsberg, as endorsed by Mr Capello

Carroll didn’t start Liverpool’s last game but did come on as a sub. He started the game before that, in the League Cup, which is of course sponsored by lager brand Carling these days. The FA’s partners for the national side include another lager brand – Carlsberg – and their lead partner for the FA Cup is Budweiser. Carlsberg also sponsor three of the FA’s other pieces of silverware: the FA Vase, Trophy and Sunday Cup. Capello’s side were trying to qualify for Euro 2012, itself numbering Carlsberg amongst its official partners. For the Champions League UEFA have Heineken getting the seemingly obligatory alcohol slot that every big football competition has in its line up of partners. For the kids watching at home, the potential footballers of the future, if alcohol doesn’t appeal they can usually spot promotions for McDonalds, Coca-Cola, Mars or some other healthy option.

As for Capellos’ comments, Kenny wasn’t going to take the bait and be drawn into a slanging match. As a player he was always good on the turn, thinking two or three steps ahead of his opponents. As a manager he’s much the same when it comes to interviews with the media: “I think Andy’s very appreciative of advice from anybody that’s got a good standing in football. I think he appreciates Fabio Capello’s advice because he’s got great respect for Fabio Capello – and I think Fabio Capello’s great respect for Andy Carroll.”

Kenny pointed out, again, that Carroll had arrived injured on January’s deadline day and was still getting back to fitness when the season ended; Liverpool have no complaints at all about him: “So, for us, as we’ve said often enough, but falls on deaf ears, Andy wasn’t properly fit last year because of a knee injury, and we’ve been very pleased with his level of fitness this year because he’s lost that knee injury. I think his fitness would stand up against anybody’s.”

Then another joke – missed – as Kenny discussed Carroll’s appearance for England on Tuesday night: “I mean you just have to look at the game the other night, there he was running as quickly at the end of the game as he was when he started it.” Carroll was an 89th minute sub.

Kenny was asked again if Carroll’s lifestyle was an issue: “I just said – we’re delighted with the progress he’s made.” 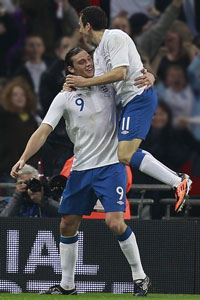 Then Kenny was asked if – as his club manager – he should be having “a chat” with Andy. Kenny probably felt like saying, “What’s it got to do with you?” but chose instead to draw attention to how obvious it was that certain elements of the media are looking to cause trouble where maybe there isn’t any. “By the way,” he said, “I don’t know how much they’re going to milk this, right, I don’t know how much anybody’s going to milk this.

“The story goes back to March. And some of the quotes go back to March – so how long are you going to milk it for?

“I think Andy’s wiser than a lot of you boys, by the way, and a lot of the people who write about it, and I don’t think his lifestyle’s anything like what you’d like it to be to get the stories.”

If Craig Bellamy sets Carroll up a few times the next time Liverpool, a club formed in a pub, are live on Sky (with a beer glass symbol in the corner of the screen for anyone watching in their local) one of them will probably be asked on camera to hand over a large bottle of champagne to his team-mate as man-of-the-match.

And we’ll raise a glass in their honour.

Stoke City v Liverpool is a 3pm kick-off and won’t be shown on TV in the UK. FoxSoccer.TV are showing the game live online but their coverage is only available to visitors with a US IP address. USA Proxy Server offer a VPN service which gives its users a US IP address that can be used in conjunction with sites normally restricted to US visitors. More details on access to good-quality streams of live Premier League football matches >>.