Don't Buy The Sun – the concert

ONE campaign that always unites supporters of both of Merseyside’s Premier League clubs is a campaign that has been going for 22 years and remains as strong now as it was the day it began. 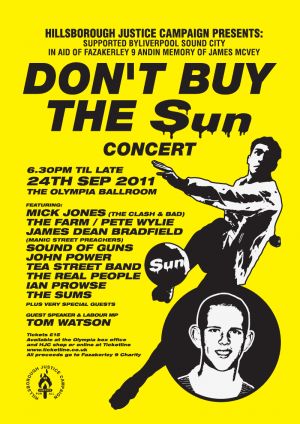 The Sun’s editor in 1989, Kelvin MacKenzie, chose to run with a pack of lies fed to his ‘paper’ by people in positions of power and in desperate need of a way of covering their backs. He chose to put the lies under a massive headline claiming it was all “The Truth”.  He took the lies at face value, spiced them up and put them on the front of what was then a popular paper on Merseyside. The lies were about the 95, later 96, victims of Hillsborough, the supporters who survived and the hero supporters who tried to save them.

It wasn’t just Liverpool fans who boycotted The Sun – after all, the lies the paper told were about real people, people whose family and friends might not be Liverpool fans, might not even be football fans, but were also real people. The victims, the survivors, those who lost someone, those who saw it happen, those who tried to stop it happening, those who were still living through the horror of it all – were all real people. And here they were reading lies that were the product of a sick imagination.

The lies became the truth in the eyes of those who believe just about anything they read in a paper. By the time Lord Justice Taylor made it known quite clearly that the claims were lies the damage was already done.

Other papers ran the lies, or versions of it, but quickly apologised. The Sun didn’t apologise for years – and the apology wasn’t accepted. After all, it was a sneering apology, an apology made by a paper that was by then under a different editor. Yet the paper’s attitude hadn’t changed, it made its apology as if it was talking to people beneath it, mocking them for boycotting it, blaming the strength of the boycott on the parent company of its rival. How can it talk down to people when it’s already beneath them, well beneath them, not even fit for the gutter?

In recent times the boycott has had fresh interest from circles outside our own football and Merseyside communities. The sister paper of The Sun, The News of the World, although never ‘officially’ part of the boycott was beginning to be seen increasingly as nothing more than a Sunday version of its daily sister paper and the comparison was essentially because both titles made money out of misery.

Now The News of the World has gone because of the fallout from a scandal of its own – but that scandal has brought fresh focus on the scandal of 1989 when The Sun thought it was acceptable to lie about the survivors of a tragedy. A charity Don’t Buy The Sun concert on September 24th, in memory of James McVey and in aid of Fazakerly 9, will raise awareness even more. 18-year-old James, known as Jay, was killed on October 9th last year after being attacked following an 18th birthday party. Fazakerley 9 is a charity that was set up in Jay’s memory with an aim to “improve social well being, reduce the effects of poverty and where possible undertake projects that will enable social inclusion within the Liverpool community”.

The line-up for the gig is strong and could get stronger, numerous names doing what they can to rearrange other commitments or expressing their disappointment that they aren’t able to.

It’s not just musicians who want to be involved. MP Tom Watson, who successfully sued The Sun for libel, has gone to great lengths to take the News of the World and its parent company to task over its practices in the years leading up to its closure and has agreed to attend the concert and make a speech. Speaking to the Liverpool Echo Mr Watson said: “I’m attending the event in support of the families of James and the Hillsborough families. It’s good in that it’s honouring James’s memory with a fundraiser while also keeping up the pressure to make sure the Hillsborough enquiry papers are published.

“People have been shocked by the phone hacking scandal, but it won’t shock people on Merseyside because they know the underhand tactics that The Sun journalists used from the 1980s. Some of their methods were despicable. The campaign to boycott The Sun is important and it should be heard in other towns and cities throughout the United Kingdom. Merseyside led the way on this and I would hope campaigners can talk to people in other areas and discuss how to make the campaign bigger.”

The MP went on: “Now that I understand how the company operates I can understand what the Hillsborough families must have gone through at the time I think they need politicians to stand by them in the end game of this campaign. They have consistently put their case with great dignity and they are a credit to Liverpool.”

The music on the night will be from Mick Jones of The Clash, Pete Wylie of Wah!, John Power of The Las and Cast, James Dean Bradfield of the Manic Street Preachers and The Farm. “Surprise guests” are also promised.

The Farm’s Peter Hooton has been part of the team organising the event and is delighted at the recognition that Tom Watson has shown: “I am really pleased the MP Tom Watson will be there on the night as he has mounted a magnificent campaign to expose the corrupt practices of certain newspapers, something the people of Merseyside have been aware of for some time.”

The Don’t Buy the Sun charity concert, presented by The Hillsborough Justice Campaign, is at the Olympia in Liverpool on September 24th (the day of the LFC v Wolves game). For more information and tickets see: The Olympia website. Alternative link for tickets – Ticketline.