Competition: Win a personalised Ireland shirt in time for Euro 2016

To celebrate Ireland’s involvement in this summer’s European Championships we are giving away a personalised replica Ireland shirt in a free-to-enter competition. 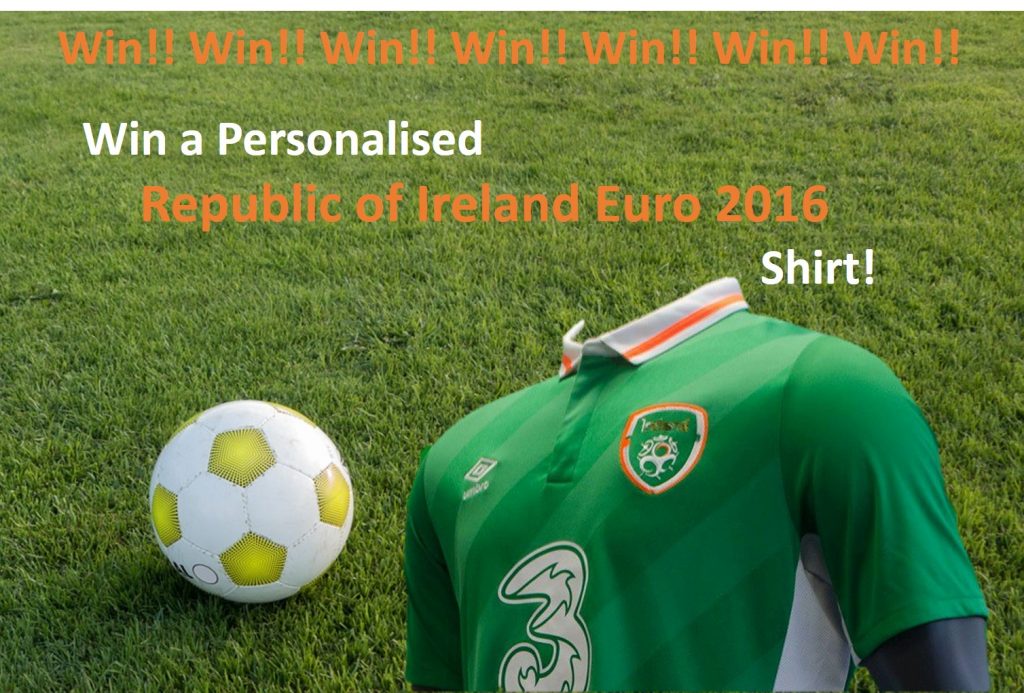 The domestic season is now over and done with but fans don’t have to wait long for the return of competitive football with Euro 2016 right around the corner. One of the nations involved this summer is Ireland and memories of slightly older supporters are flooding back from the 1988 tournament when the Irish lads upset another of this summer’s qualifiers, England.

Read on for details of how to enter our competition.

Wales and Northern Ireland are also involved this summer and whether there will be any upsets this time remains to be seen, but if you think there might be one or two red faces you can always Bet on the Euros with Paddy Power, whether it’s for individual games or the tournament as a whole.

The 1988 tournament was held in what was still then West Germany with just eight teams qualifying compared to the 24 sides who are involved in the Euro 2016 finals.

Ireland named three Liverpool players in their Euros squad and all three started the group’s curtain raiser against the English, played at the VfB Arena in Stuttgart. John Aldridge, usually seen in Liverpool colours wearing the No.8 shirt – as worn by his boyhood hero Roger Hunt – was handed the No.9 shirt for Ireland, with Reds teammate Ray Houghton wearing the 8.

Also involved for the Boys in Green was Liverpool and Ireland legend Ronnie Whelan, the midfielder wearing the No.6 shirt for the tournament.

The half a dozen Liverpool players involved in the game on and off the pitch would still have fresh memories of the upset at Wembley in the FA Cup final just a few weeks before when Wimbledon broke Reds hearts with their unlikely victory over hot favourites and league champions Liverpool.

Could Ireland pull off what would be seen, at least in England, as a similar upset?

It took just six minutes for Jack Charlton’s Ireland to take the lead and, try as England might, they were unable to break the Republic down, thanks in large part to goalkeeper Packie Bonner.

The game ended 1-0 and Ireland were in heaven.

The rest of the tournament didn’t go quite so well for Ireland and their adventure was over soon after, but that victory over England remains one of those games that fans will talk about for a long time afterwards. Also at least Ireland, unlike England, went home with some points on the board. Ireland finished third in the group with three points (it was still two points for a win in those days), Bobby Robson’s side losing all three of their games.

To enter our competition just answer the following question. Leave your answer in the comments before the closing date and we’ll pick a winner at random shortly afterwards.

Q. WHO SCORED IRELAND’S GOAL AGAINST ENGLAND IN THE 1988 EUROPEAN CHAMPIONSHIPS?

As a bonus – just for fun – who got the assist?

Leave your answer in the reply/comments box below.

Please make sure you enter your email address correctly in the space provided – we won’t share this with anyone without your permission, but we will need this to contact you in the event you win the prize! Closing date: 11:59pm (UK & Ireland Time) Monday 30th May 2016. The decision of Anfield Road is final.