Time to get back to the football

WITH an FA Cup fifth round tie next weekend and a Carling Cup final the weekend after today sees Liverpool play their last league game until March. Their opponents, Manchester United, were knocked out of the FA Cup by Liverpool and so have next weekend off – but they do have a couple of Thursday night Channel Five games to look forward to in the Europa League.

Leading into this game the football is hardly getting a word – but that’s hardly unusual. Ferguson always plays his games in his pre-match press conferences against teams he sees as a threat and although his topic this week was something more serious than the usual ref-baiting he knows exactly what he’s doing. The media love to join in with it too, practising their mock outrage and hoping for some headlines. 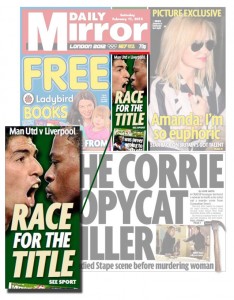 The circus is leaving town but it’s still throwing up a few fliers for its last performance. The Mirror has invested big time to make its website look more upmarket than before – pity those responsible for its dodgy headlines, twisted translations and trouble-stirring Photoshops make its football section and print version look more downmarket than ever. Never mind Murdoch’s reported plans for a Sunday version of The S*n, the Mirror seem to think there’s a market for a daily News of the World.

Liverpool aren’t in the title race, it’s all about fighting for fourth place as far as Liverpool’s league season is concerned. The Mirror know this – so why put “Race for the Title” as a caption under a Photoshopped picture of a Liverpool player and Manchester United player? Simple – because it’s a picture of Suárez and Evra and because their use of “Race” has nothing to do with a run towards top place.

To be fair to The Mirror there is one reason to read it – Brian Reade. The exception to the Mirror’s new dumbing down rule, he’s written some sense about today’s match – it’s just a pity the people the Mirror is now aimed at won’t see it as sense or as sensational enough. On the website it’s billed as “Brian Reade’s controversial column.” If calling for sense is controversial it tells us a hell of a lot about the Mirror of 2011.

There won’t be a Daily Mirror tomorrow of course, The Sunday Mirror and Sunday People will be out instead, but by Monday lunchtime the three titles will all have done their worse and, barring any new controversies today, their focus will be on other issues. As they’re doing that a lot of Liverpool supporters will be quietly looking back at how various titles dealt with the Suárez Evra incident over the past few months. Paper boys might find their bags are a little lighter.

As for the football, Liverpool will put their strongest possible side out, or at least the strongest possible side for the tactics Kenny and his staff choose to go with. Injuries permitting the back four is likely to be Johnson, Skrtel, Agger and Enrique. Dalglish said everyone was fit, but Enrique missed the Spurs match and Kenny wasn’t going into details about how well he’d recovered. If he misses out Kelly will keep his place.

Spearing is likely to start, as is Steven Gerrard. Where Gerrard plays is open to question, as is the rest of Kenny’s teamsheet.  Suárez will almost certainly start, but will that mean Dirk Kuyt, Craig Bellamy or Andy Carroll step down to the bench? Dalglish may find a way to accommodate all four meaning Charlie Adam, Stewart Downing and Jordan Henderson wouldn’t all be starting. It’s a dilemma Dalglish will be glad to have.

Manchester United want the win to make the league table look better before leaders and neighbours Manchester City play their own game. In recent visits to Anfield they’ve come looking for a draw but they’ll want all three points today. Liverpool could do with all three points too – having drawn at home to Spurs on Monday they need a win to go temporarily into fifth place above Arsenal and Newcastle and to keep the pressure on fourth-placed Chelsea.

Evra messed up in the cup match, his mistake helping Liverpool make it 2-1 and ensuring this would be the last meeting of the season between the two sides. Suárez was celebrating that win from the stands but today he’ll be hoping to celebrate on the pitch. If he scores there’ll be no shortage of cameras picking up his reaction – which makes it all the more likely it’ll be another player on the scoresheet should Liverpool win.

Whatever’s been going on off the field there’s no doubt the two managers have been focussing on preparations for what’s going to off on the field. It should be a good game – let’s hope it is.